Architecture practice Feilden Clegg Bradley Studios has created a series of crescent-shaped student housing blocks with a CLT structure for King's College at the University of Cambridge.

Called Stephen Taylor Court, the blocks contain 84 homes for King's College's graduate students and fellows that were designed to Passivhaus standards and to have as low a carbon impact as possible.

"Due to the considered material choice, prioritising low-embodied carbon materials, reuse of existing materials, local sourcing and targeting recycled content, and accounting for carbon sequestered in the cross-laminated timber, the project has negative embodied carbon on completion as more carbon has been sequestered in its production than emitted," Feilden Clegg Bradley Studios partner Hugo Marrack told Dezeen.

The architecture practice used its own carbon tool named FCBS Carbon at early design stages to help estimate and limit the whole-life carbon emissions of the scheme.

FCBS Carbon is a spreadsheet that is free to use by other architects and considers all the CO2 produced by a building, including the building material, construction and demolition.

Feilden Clegg Bradley Studios used Stephen Taylor Court as a "test case" for its tool and calculated its net carbon performance – both operational and embodied – to be less than zero for the first 10 to 15 years of the project's life.

According to Marrack, the carbon calculations for the project did not consider furniture, fixtures and equipment (FF&E) or mechanical, electrical and plumbing (MEP).

Located within a conservation area in Cambridge, the apartments have a cross-laminated timber (CLT) structure clad in water-struck gault bricks that are similar in appearance to traditional Cambridge bricks.

The CLT structure was chosen for its lightweight property, airtightness of the structural envelope and the material's low embodied carbon.

"This not only reduces the amount of concrete used in the substructure but also provides a perfect Passivhaus foundation solution." 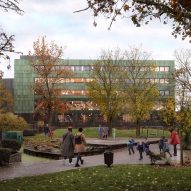 "Detailing of any inherent thermal bridges, such as facade restraint ties, is also drastically simplified due to the robust and solid CLT structural envelope – providing complete flexibility on location of any fixings required," continued Wallwork.

Feilden Clegg Bradley Studios plans to continue to work with the college in the future to help maintain net-zero carbon beyond the first 10 to 15 years after completion, by implementing renewable energy options such as photovoltaic panels.

The 4,300-square-metre scheme is located within a conservation area known for its arts and crafts houses, which influenced Feilden Clegg Bradley Studios' design.

The housing at Stephen Taylor Court is made up of three brick crescents surrounding a garden courtyard with an adjacent red brick villa.

"The central triptych of three crescents creates an open and informal court which provides depth and breadth to views from the streetscape to the leafy context beyond," said Hugo Marrack.

Steep-pitched roofs, dormer windows that punctuate the roofline and oriel windows on the gable ends of the apartments reference the arts and crafts buildings in the area.

"The sympathy with the arts and crafts approach is in celebrating the joy in each of these building details and the material's properties, rather than ironing them out, as one might with a more minimal approach," Marrack explained.

"This being said, the results aim towards a leaner, contemporary expression of its time, rather than forms of reproduction. In some respects, the outcomes are almost brutalist," he continued.

Along with the newly built housing, Feilden Clegg Bradley Studios refurbished and extended an existing Victorian-era villa on the site to accommodate a common room, library and laundry room.

Stephen Taylor Court is the second graduate accommodation at the college to be built in recent years after the development at Cramner Road by British firm Allies and Morrison, which was also built to Passivhaus standards and was longlisted in the 2021 Dezeen Awards.

The photography is by James Newton.