Slabs of board-marked concrete form the walls, floors and roof of this holiday home designed by architects by Luciano Kruk and María Victoria Besonías for a coastal forest near Buenos Aires (+ slideshow).

The property is primarily constructed from timber-imprinted concrete – a popular material for architects Kruk and Besonías, who have worked together on a number of projects including a pair of infill houses with robust facades.

The pair created the house under the studio name BAK Aquitectos, but have since set up separate practices.

A smaller volume hosting a guest bedroom is propped beneath it, helping to level the building on the sloping site.

Flaps of concrete fold around the facade, screening glazing in bedrooms and bathrooms to provide protection from the sun and privacy from neighbours, and visually breaking up the bulk of the building.

"The house was planned as a compact volume that could be located in the existing forest glade," said the architects.

"It is certainly the particular patch, which gives uniqueness to this home. Its sharp relief, the characteristics of its accessibility, quantity, quality and position of its trees were crucial project issues."

"The resulting prism has two very distinct facades," they added. "Facing southeast it is quite closed, with one major breach in the social sector for access, the opposite [side] has large openings determined by a series of vertical partitions that do not reach the floor." 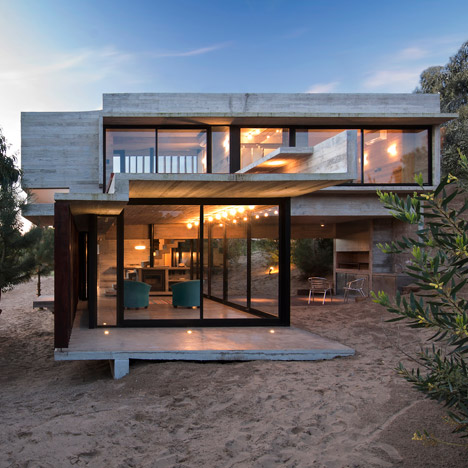 While many of the South American projects from Dezeen's archives favour a rugged concrete aesthetic – with multiple examples in Chile, Argentina, Uruguay and Brazil – the architects claim that using the material in its exposed state is not indicative of the continent's architecture.

"Broad-marked concrete is a traditional way to make the structures, but it's not that common to see it exposed," Kruk told Dezeen. "Here in Argentina it's not popular at all."

The theme is continued in the interior, where most of the surfaces and furniture area also made from concrete – including slabs that form beds in the basement level. A few wooden chairs and a double bed in the master suite are the few exceptions.

An open-plan lounge and dining area sit in the centre of the upper floor plan. The area is bracketed by a pair of glass walls, that can slide back to adjoin terraces – concrete on one side and timber on the other.

A shelving unit with pigeonhole openings forms a room divider between the lounge and the staircase leading to the lower storey.

Objets d'art and select books are displayed within some of the nooks, while others are left unoccupied to let light filter through.

Three bedrooms and corresponding bathrooms are located at one end of the upper floor, while the kitchen is set at the other.

The living space is often used as a dividing element in Luciano Kruk's architecture, including in his holiday home featuring a rooftop pool, which he designed in collaboration with his girlfriend Ekaterina Künzel.