Over 2,000 litres of wine and apple juice will be dispensed from giant "udders" designed by French studios Barreau et Charbonnet and Metalobil for a festival at a vineyard in Pays de la Loire.

Nantes-based studios Barreau et Charbonnet and Metalobil designed the PI5 installation for the La Cîté Idéale festival, which takes place from 4 June to 4 November 2016 at the Royal Abbey of Fontevraud.

Now almost complete, the installation consists of five conical vessels suspended within bays in the building's former kitchen. Reminiscent of the abbey's scaled spires, the six-metre-tall structures are covered in thousands of pointed pine shingles. 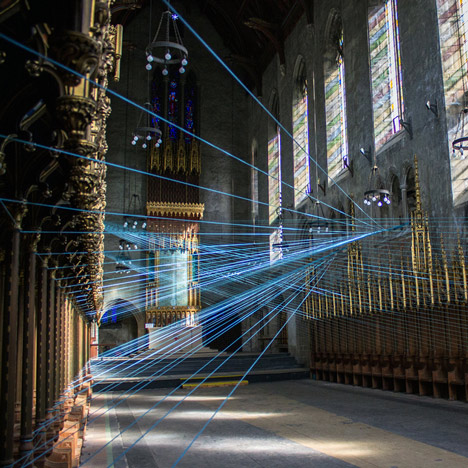 The downward-pointing tip of each structure will be fitted with a teat, which visitors will squeeze to dispense red, white and rose wines, as well as water and local apple juice.

The design is based on the story of Romulus and Remus in Roman mythology. Abandoned to die by a river, the twins were saved and suckled by a she-wolf and went on to found the city of Rome, as the tale goes.

"The goal was to imagine an installation connected with the abbey and related to its story," said Jules Charbonnet of studio Barreau et Charbonnet.

"The external structure made us think of hanging udders, and with the context of the ideal city of Roman architecture, we linked immediately to Rome, and the built city by Romulus and Remus often represented sucking the udders of the wolf," added co-founder Nicolas Barreau.

Pouches of wine and apple juice will be hidden inside the structures and linked to the teat, offering succour to visitors to the show.

"We have developed a technical system linking the calf teat to the VinniBag," the studio told Dezeen.

"To dispense this wine or juice, visitors only have to milk using the calf teats placed at the end of each conical structure."