Brothers Nima and Sina Keivani based the design of the seven-storey block on elements commonly found in traditional Iranian architecture.

The architects particularly wanted to reinterpret the orsi window, a type of sash window with latticed woodwork and coloured glass typically used to help reduce sunlight and heat, and repel insects in the hot climate. This inspired the project name Orsi Khaneh.

"The main concept of this built project originated from Iranian traditional architecture," said Keivani Architects. "They were using a special type of window, locally called orsi, made by wooden lattice and stained glasses, which have effective technical functions." 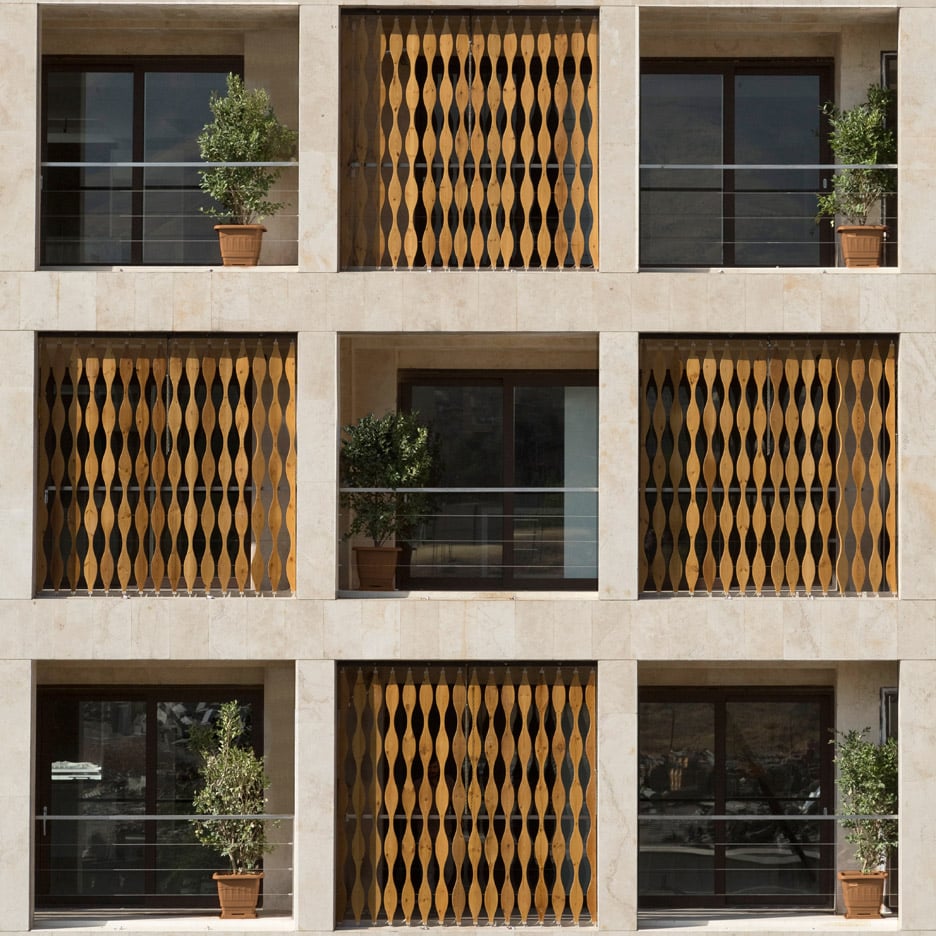 "We tried to make a modern orsi window, with the aim of creating a space with an Iranian spirit or genius loci, which respects both the mental and biological needs of the users," added the brothers. "So the elements like water, plants, and light have been highlighted."

The street-facing facade is made from a double layer of heat-treated timber, inset with panes of stained glass and planting that not only serve as a decorative element but also help to control temperature.

Matching slatted sunshades can be raised over the windows to provide further control of sunlight.

The appearance is in part inspired by a pair of historic residences with intricately moulded and patterned facades – Borujerdis House and Tabātabāei House, located in the Iranian city of Kashan.

The large window frames are made from slabs of a sedimentary stone called travertine. Their funnel-like shape helps to further reduce heat buildup.

At the back of the building, recessed balconies overlooking a small ramped courtyard are framed in the same pale stonework.

The courtyard provides access to underground parking and is decorated with mosaics that form grassy patterns.

Wooden flower boxes are mounted on the walls surrounding it as well as sections of the facade, hinting at the vegetated roof terrace, which features manicured flower beds, an outdoor fireplace and a gazebo.

Inside, the ground-floor lobby links with a shared staircase and is lined in glossy, dark stone to reflect tiny spotlights in the ceiling. Small sculptures of pigeons, a symbol of peace in Iran, are set into niches in the wall of the staircase.

The strict economic sanctions levied on Iran for its nuclear policies are gradually lifting and architecture is becoming increasingly more adventurous, but Keivani Architects said the country's situation still affected many choices on the project.

"Economic limitations, authorities and municipality potentially can be counted as a strict limitation to a project," said the architects. "But we tried to use these factors as a motivator to design and make the building with propitious, recyclable, and native materials."

Other recently completed projects in Iran include the country's largest pedestrian bridge, an apartment block with wavy wooden shutters, a house made up of white cantilevering boxes and a housing scheme with curtain-like brickwork.