Lamb adapted his 2014 Scrap Poly Pastel furniture collection to create seating and a record stand for I Have Left You the Mountain, by curators Simon Battisti and Leah Whitman-Salkin, and London design studio Åbäke.

The irregularly formed benches, stools and plinths are assembled from offcuts of expanded polystyrene and sprayed in a coat pastel pink polyurethane rubber to create a tough, rubberised exoskeleton.

They invite visitors to sit down and either read or listen to the exhibition's content.

The exhibition highlights the large volume of Albanian nationals that have fled the country, following radical political shifts that include becoming a Stalinist state after the second world war, but transitioning to democracy in the 1990s after 46 years of communist rule.

"In 2013, 45 per cent of all Albanian nationals lived abroad. Migration has real emotional and psychological consequences," said the curators. 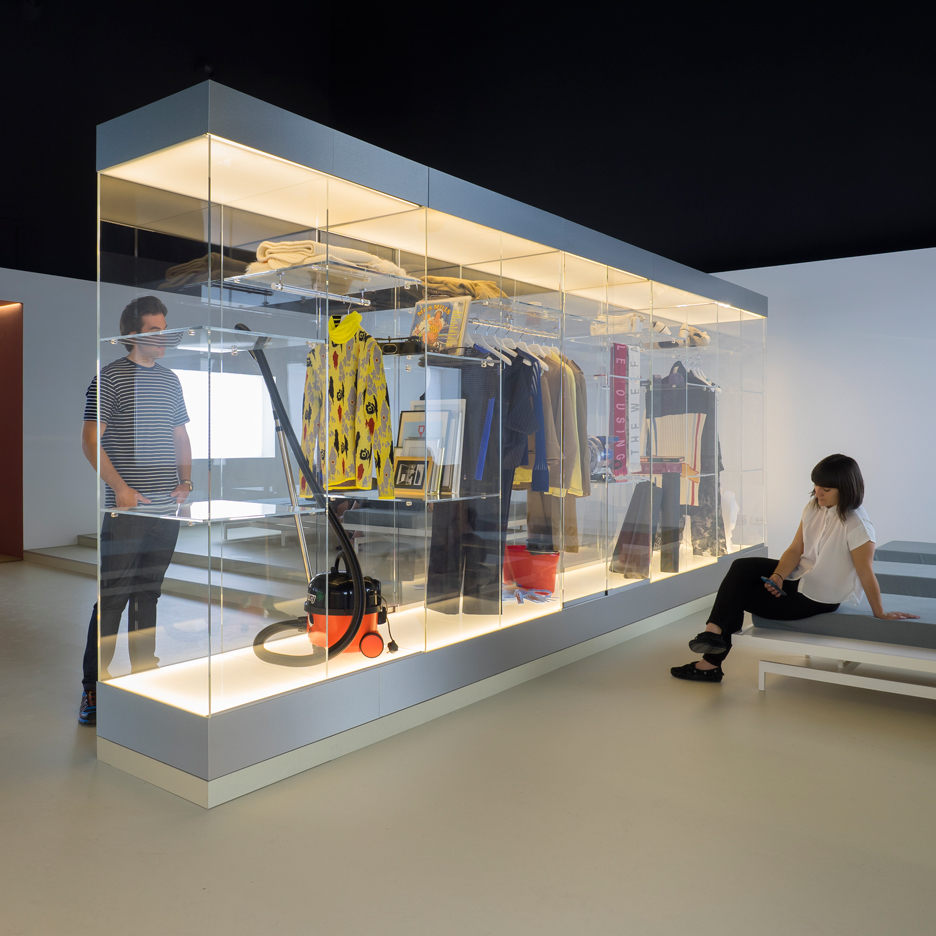 "I Have Left You the Mountain initiates a conversation about the urbanism of displacement, projecting the Albanian case onto an international stage, with the express intention to transmit that dialogue and its speculations back into Albania."

Urbanist Finn Williams – who co-curated this year's British Pavilion at the Biennale – is also a contributor, with a piece about London's Home Office architecture in Croydon.

A group of Albanian iso-polyphonic singers – a style of traditional folk singing – have created a soundscape that also accompanies the exhibition, with lyrics exploring the themes of separation, loss and migration.

Recorded onto a 12-inch vinyl, the songs sung by groups of singers from Fier, Vlorë, Tirana, and Himarë are played on loop through a speakers suspended from the ceiling of the space.

Other details include plastic strip curtains, which separate the space from neighbouring national pavilions at the far end of the Arsenale exhibition hall.

I Have Left You The Mountain is open to the public until 27 November 2016 as part of the Venice Architecture Biennale.

This year the Golden Lion for best national pavilion went to Spain. Other standout pavilions include Switzerland's, which features an inhabitable cloud-like structure, and Australia's, which contains a swimming pool.

Photography is by Špela Volčič.