Business news: low-energy designer lighting brand Plumen has launched a crowdfunding drive to fund new product launches and "kick the business up to the next level".

The company aims to raise £500,000 from small investors via a pitch on UK crowdfunding platform Crowdcube.

The brand, which won Design of the Year for its Plumen 001 light bulb in 2011, is gearing up to launch two new lighting products this year – one aimed at the luxury market and the other at the mass market.

"This is all very exciting, but also expensive, so we've decided to get funding for the business, to make sure we fuel these launches properly and kick the business up to the next level," said the London-based brand.

Plumen's co-founder and creative director Nicolas Roope said the company, which was launched with £45,000 of funding from the three founders, needed investment to grow in scale.

"We launched the whole thing on our own steam more than five years ago and it's been growing steadily as a business and a brand, but we've reached a point where we are looking forward," he said.

"The pipeline is full of products and at this moment it feels like it's better to raise the money and give a little chunk of the business away so we can do the launches properly."

Plumen is offering up 5.88 per cent of the company as equity in return for the funding, giving the company a valuation of around £8.5 million if it reaches its target.

Roope said the company looked at the traditional funding routes of borrowing money from the bank or seeking venture-capital investment before deciding on crowdfunding.

"The investment community is not really created for companies like us," Roope said. "Most of the VCs are looking at digital media, where you can have six people starting a business and flipping it in five years for a billion." 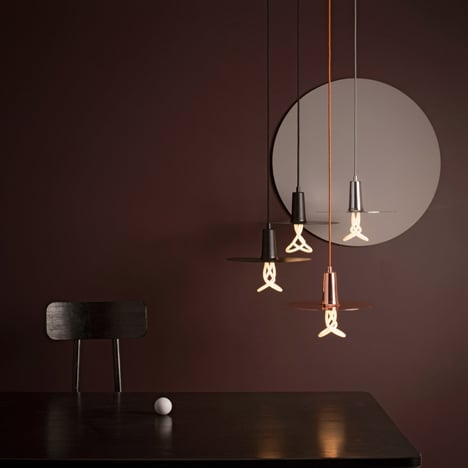 He added: "When you look at a hardware business, it doesn't have that potential because it takes longer to establish the brand, the reputation, the distribution and all those kinds of things."

"You say that to a VC and they struggle with it, but say it to ordinary people, and they get it because they've dealt with the problem as consumers themselves," he said.

"They're probably also familiar with experiences of the first round of smart lighting, which hasn't been particularly rewarding or exciting, and they're wondering, is there a future in that?"

It has so far sold half a million of its Plumen 001 and Plumen 002 compact fluorescent light bulb ranges – the first designed in collaboration with Samuel Wilkinson and the second created with Bertrand Clerc.

Plumen also makes shades and pendants for its products.

The forthcoming Plumen 003 will be a combined bulb and shade, which the brand describes as "the most beautiful light bulb in the world," while other launches will exploit LED and smart-lighting technologies.

"Filament LEDs have given traditional format bulbs energy efficiency; our design approach will bring them into the 21st century."

Further ahead, Plumen aims to turn all its products into smart lights by embedding sensors that detect movement and brightness. This will allow them to automatically adjust lighting levels, switch themselves off when you leave the room and act as motion sensors when you're away.

Plumen employs around a dozen people and turns over just over £1 million per year.

Plumen's Crowdcube pitch is open to small investors from today, with over half of the £500,000 target already met via an earlier private funding window.

Investors can stump up as little as £10, although Crowdcube points out that capital is at risk when funding a business.

The Crowdcube model differs from the better-known crowdfunding model offered by platforms such as Kickstarter, since investors in the former get equity while the latter only offers rewards. Crowdcube is therefore closer to traditional equity investment, with the associated risks of losing all or part of the investment.