A three-storey-high atrium brings natural light and ventilation into the heart of this skinny house in Vietnam by Nguyen Khac Phuoc Architects (+ slideshow).

Designed for a couple and their child, Cul-de-sac house slots into a four-metre-wide site in the city of Vinh, which is flanked on all four sides by other houses.

It takes its name from the pathway that leads to the entrance from the street.

It is the latest example of the trend, particularly in densely populated Southeast Asian cities, for narrow residences. 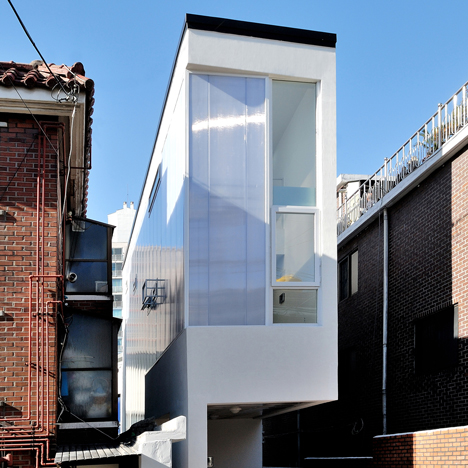 As none of the facades are open to the street, the team arranged the interiors around the central atrium, which is topped by a skylight. Rooms feature windows facing down into this space.

The design team also added a grid of square openings – measuring 60 by 60 centimetres – to the facade, allowing air to flow through the building.

"In this tiny property, our idea is to make voids in order to gain natural light, ventilation, and plant as many trees as possible," studio founder Nguyen Khac Phuoc told Dezeen.

"The squares play a role as a membrane to gain the indirect natural light in a tropical climate and provide air filtration."

As well as the main atrium, there is also a double-height space near the entrance. Both spaces contain trees – a popular feature in Vietnamese residences – and these grow up through the gaps.

The ground floor was designed to feel like an outside space, with air flowing freely through the facade openings and the white metal front doors allowing the space to be opened up to the elements.

"The ground floor was seen as a courtyard inside the house, working as a garage, a playground, and a deck," said Nguyen Khac Phuoc.

A house-shaped doorway provides the building's entrance, leading directly into the atrium. Towards the back of the ground floor, there is a kitchen-cum-dining room behind a wall, as well as a small bathroom.

A staircase with wooden steps and a white metal frame ascends to a living room on the first floor, which sits alongside a bedroom and toilet. Another bedroom and a toilet are located on the second floor, as well as a worship room and a laundry room.

Other recent examples of narrow houses in Vietnam include a 3.5-metre-wide property by Kientruc O and a three-metre-wide family home by a21 Studio.

Photography is by Hoang Le.