Adjaye Associates, Henning Larsen Architects and Caruso St John are among the seven shortlisted teams whose designs for a major new art museum in the Latvian capital have been unveiled today (+ slideshow).

Set to open in 2021, the €30 million (£24 million) cultural building aims to become the "most-visited art museum in the Baltic states". It will showcase art and visual culture from Latvia and the Baltic Sea region, from the 1960s to the present day. 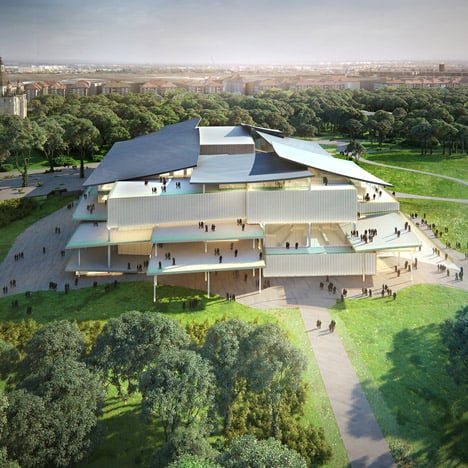 Latvia's minister for culture Dace Melbārde said the building will become a catalyst for changes in Latvia.

"It is a source of pride that we can experience the first example in Latvia’s history of cultural patronage on such a scale," he said.

All seven shortlisted teams include at least one local studio. Their designs were unveiled today by competition organiser Malcolm Reading Consultants.

David Adjaye's London-based firm is partnering with AB3D. They propose a building with an angular roofscape, referencing traditional domestic Latvian architecture, to bring northern light down into the galleries.

The late Henning Larsen's office, which is based in Copenhagen, envisions a structure that twists to create two sculptural entrances – one facing the city, the other opening out to a new city garden. It partners with MARK Arhitekti.

Sauerbruch Hutton and partner Arhitekts Ingurds Lazdiņš have opted for a "non-iconic" design, intended to look like a simple shed or warehouse.

Similarly, Neutelings Riedijk Architects and partner Brigita Bula propose a rectilinear structure with a filigree white concrete skin. They describe their design as "a long white canopy over a black treasure box".

Lahdelma & Mahlamäki Architects – the firm behind the Finlandia Prize-winning Museum of the History of Polish Jews – has teamed up with MADE Arhitekti on its design for a flexible container-like museum.

Meanwhile, wHY is working with Outofbox and ALPS. Their design is described as a streetscape, closed up during the winter but opened to the landscape in the summer.

The museum will be built as part of New Hanza City, a new district at a former railway goods station in the north of the city. Comprising 24.5 hectares, the development also includes offices, apartments, a hotel, a nursery school and a public garden.

The building is scheduled to open on 18 November 2021. It will receive part of its funding from the government but will mainly be financed through the Boris and Inara Teterev Foundation and the ABLV Charitable Foundation.

"The ambitiousness of the project proves that, by involving the private sector, it is possible to embark on the construction of large-scale, nationally important infrastructure," added Melbārde. "The creation of the museum is also a huge investment in the shaping of Latvia's international image."

More architecture and design in Latvia