A team of architects in Chicago has proposed a house made of 3D-printed plastic and carbon-fibre panels wrapped around glazed walls (+ slideshow).

Their project – titled Curve Appeal – comprises a curvaceous, arching structure made up of panels that create an exterior skin and an interior core. These are combined to form the roof and large portions of the facade.

Competition organiser Branch Technology, a US construction company, has developed its own mix of plastic and carbon fibre that can be printed into a "self-supporting cellular matrix".

This technique will be used to create the panels, which will be welded together to produce continuous surfaces. 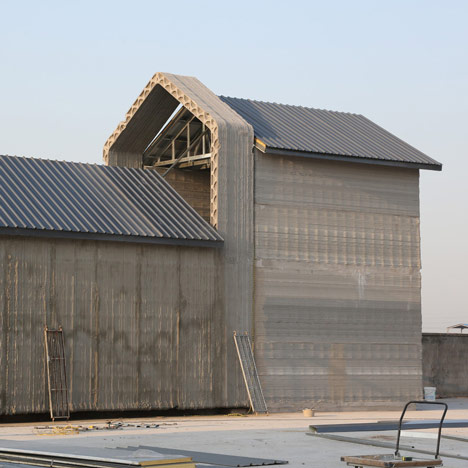 "The initial design surfaces of the house will be broken down and optimised for printing the 3D cellular matrix," the team told Dezeen. "These portions will be aggregated together to form a singular cohesive structure."

Expanding spray foam and concrete will then be added to the structure, both for strength and to form a weather barrier. Finally, elements such as glazing and interior finishes will be installed.

The brief asked for a single-family home measuring between 600 and 800 square feet (56 and 74 square metres), including a kitchen, bathroom, living area and one bedroom.

WATG – also known as Wimberly, Allison, Tong and Goo – incorporated large sections of glazing into its design to minimise the need for artificial lighting, while the archways are intended to blend the building into its site – the location of which is undisclosed.

"Curve Appeal is a very thoughtful approach to the design of our first house," said Branch Technology founder Platt Boyd. "It responds well to the site conditions, magnifies the possibilities of cellular fabrication and pushes the envelope of what is possible, while still utilising more economical methods for conventional building systems integration."

Planning for the construction will now take place at Branch Technology's lab in Chattanooga, Tennessee. and the printing is expected to begin in 2017.

A variety of techniques for 3D printing architectural structures have been proposed recently. A group of University of Tokyo students developed a 3D-printing pen that can create complex structures out of plastic sticks, while startup MX3D is using robots to print out a canal bridge for Amsterdam.

Earlier this year, a 3D-printed bioplastic was combined with a tensile fabric structure to create facades on a building for hosting European Union meetings.

"Digital modelling has advanced rapidly where geometrically complex organisations are easily achieved," said the WATG team. "However, there still remains several hurdles in order to realise them as built projects."

"A laborious process of rationalisation, optimisation and panelisation of designs, the financial implications of mass customisation and more complicated construction techniques are some of the issues that one frequently encounters," they added.

"The promise of 3D printing is that it can collapse those limitations, which is a fundamental shift in the relationship between architecture, construction and manufacturing."