A fluorescent orange staircase spirals up through the centre of this house that architect Martin Dulanto has completed in Lima, Peru (+ slideshow).

The sculptural staircase connects all three levels of the small property, which the Peruvian architect designed as part of a housing community called Club Las Palmas in the south of the city.

Named Casa Blanca, the house has a largely muted colour scheme, with a white exterior, grey internal walls and some concrete surfaces. So the staircase becomes the most prominent feature in the building.

"The client loved the idea – both the shape and colour," explained Martin Dulanto, who is also based in Lima. "It gives character, strength and personality to the house."

The staircase is made from reinforced concrete, with an concealed iron core that gives it enough stability to be largely self-supporting. A cement render creates its smooth finish, while epoxy paint gives it the vibrant colour.

Dulanto said the work of Brazilian architects Oscar Niemeyer, Lina Bo Bardi and Marcio Kogan – who have all used colour in their work – inspired the design. 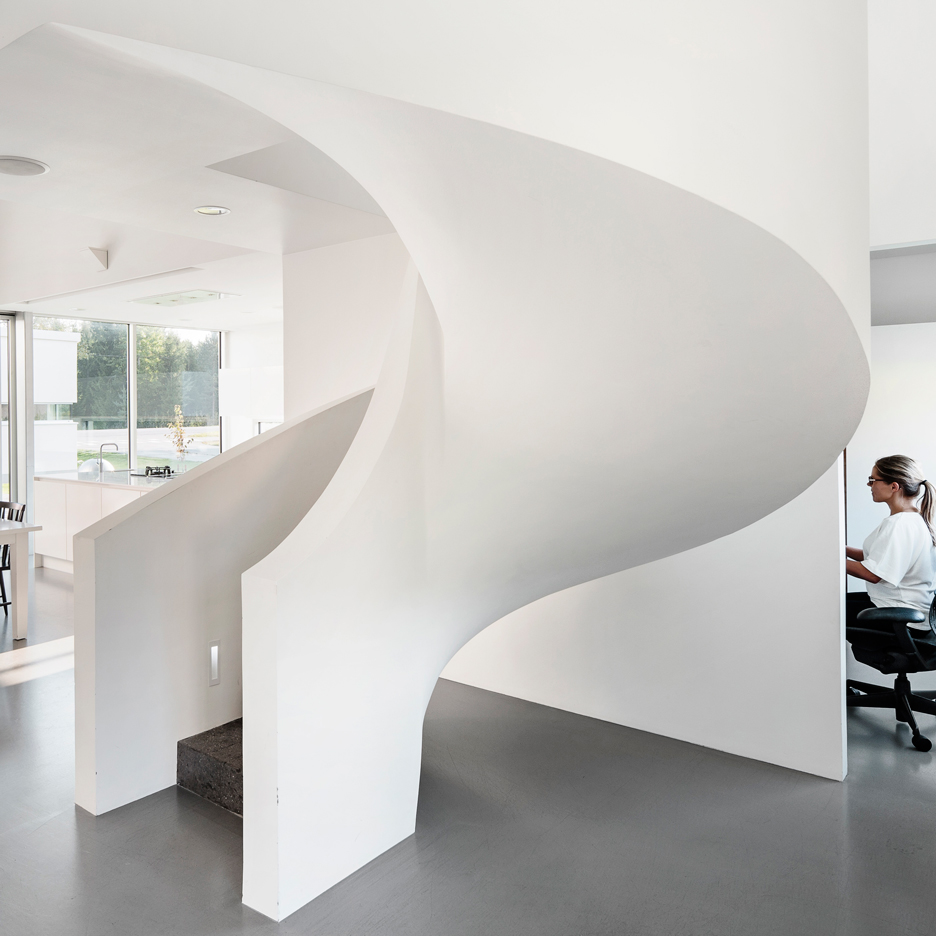 "It is very plastic and playful," he told Dezeen. "As a powerful, personality element, you either love it or hate it."

"In contrast to the stairs, the rest of the house is dominated by neutral tones," he added. "The idea was to ​​not detract prominence to the stairs – nothing must compete with it."

The staircase is visible through a glass facade that wraps around two sides of the building's ground floor. This level is mainly open plan, containing areas for cooking, dining and lounging, as well as the master bedroom.

Three more bedrooms and another living room are located on the basement floor, while the uppermost level is a sheltered roof terrace with a barbecue area and a pool.

Furnishings in these rooms follow the same muted tones as the building, although Dulanto has added a few dashes of colour. For example, there are orange cushions in various rooms, while pink flowers line the roof terrace.

Photography is by Juan Solano.