Design Miami/Basel 2016: a demountable office by French Modernist designer Jean Prouvé, which was used as a swingers' club until recently, has been restored for display at this year's Design Miami/Basel fair (+ slideshow).

The structure, now known as the Maxéville Design Office, began life in 1947 at the historic Ateliers Jean Prouvé in Maxéville and is being presented by the Galerie Patrick Seguin, frequent purveyors of Prouvé's work.

The eight-by-12-metre demountable consists of a portable frame, enclosing a fluid space that can be modified with partitions and one-piece facing panels.

It has floor-to-ceiling windows on one side, smaller windows on two sides and sliding glass doors that open onto the front patio.

Although it was never completed to plan, the demountable was adopted as the atelier's design studio, and sat at the entrance to the Maxéville factory, across from Prouvé's own office.

While other Prouvé creations at the site were destroyed after his departure from the company in 1953, this one remained concealed behind cladding and over time served as a plumber's office, restaurant and finally a swingers' club called Le Bounty. It was dismantled and restored by Galerie Patrick Seguin in 2015. 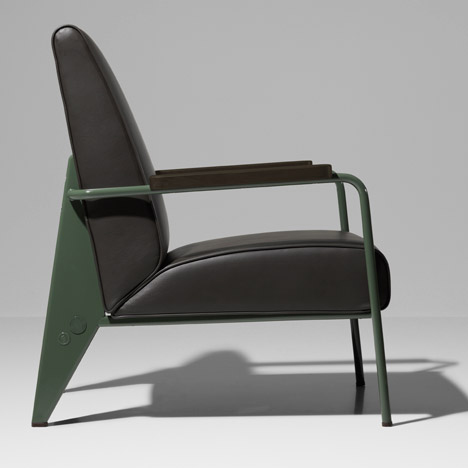 The demountable was originally designed for the Noisy-le-Sec experimental site and was successfully presented at the Ministry of Reconstruction's New House Competition in early 1947.

It is being presented at the Design Miami/Basel collectors' fair in Switzerland, taking place from 14 to 19 June 2016, along with documentation of the restoration process.

Born in Nancy, France, in 1901, Prouvé rose to become one of the most important architects and designers of the mid-20th century. He died in 1984.

His lightweight, demountable structures were designed to provide housing relief and inspired some of today's modular housing solutions.

Founded in 1989 to promote 20th-century French design, Galerie Patrick Seguin has been leading the resurgence of interest in Prouvé's work recently. They have hunted down and restored a variety of examples of his demountable houses.

Others involved in resurrecting the architect's work include G-Star Raw and Vitra. The companies collaborated to reissue his office furniture designs from the 1940s.

"Prouvé is now recognised as the most important architect-engineer of the mid-20th century," Prouvé dealer Patrick Seguin said in a 2013 interview with Dezeen. "Before Prouvé, Modernism was [bent steel] tubes."

However, Prouvé's demountable houses did not solve France's post-war housing crisis and very few of them survive.

"There was a programme of 160 houses, but few of them were built and most of them were destroyed after the war," said Seguin.