The livestream has now ended and, at the request of the architects, is not available to rewatch. However, you can watch other Royal Academy of Arts annual architecture lectures from previous years here.

Dezeen partnered with the Royal Academy of Arts to livestream this year's architecture lecture, which is part of the programme around the institution's yearly summer exhibition.

Titled Spare Parts, the lecture explored how public architecture can be used to improve communities' quality of life, as well as how architects can work towards environmental sustainability. 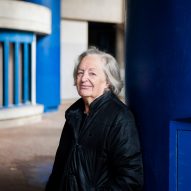 Bru and Theriot also discussed the development of previous projects such the Saint-Blaise Cultural and Sports Centre in Paris, which was nominated for the Mies van der Rohe Award in 2015.

In addition to co-founding Bruther in 2008, the pair have also been professors of Architecture and Design at ETH Zürich since 2019.

Bruther is known for its public projects and its dedication to socially-engaged and responsible architecture. While speakers are usually selected based on the impact of their existing work, Bruther were selected for this year's lecture based on their future potential said the institution.

Last year's lecture was given by Atelier Bow-Wow founders Yoshiharu Tsukamoto and Momoyo Kaijima, who discussed the architectural impact of the Olympic Games in Tokyo and how it influenced their own work.

This article was written by Dezeen for Royal Academy of Arts as part of a media partnership. Find out more about Dezeen partnership content here.