Benjamin Hubert's design studio Layer has created a collection of slip-cast ceramic trays with an integrated charging system that allows tablets and mobile phones to be powered wirelessly.

"The Charge Tray collection exudes high craft rather than high tech," said Layer. "With a design language informed by crafted homewares, [the collection] minimises the visual impact of technology in the home and enables easy wireless charging of technology devices."

Each tray encompasses a compression-moulded silicone module on its underside that houses the wireless charging system. 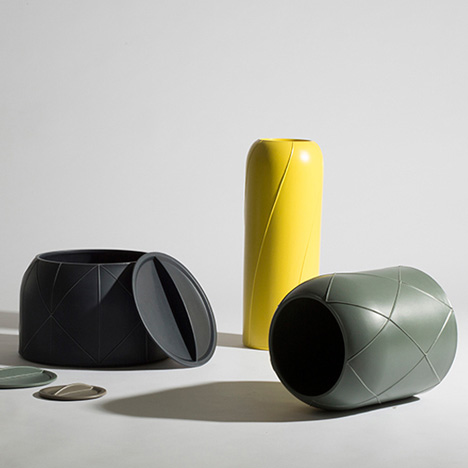 When in contact, a magnetically charged coiled wire within the station induces a current in another coil located in the device, which can then use that energy to charge its own battery.

Swedish furniture giant Ikea has also aimed to do away with chargers entirely by integrating wireless ports into a range of furniture and homeware.

The Charge Tray collection first launched in April 2016 at Milan design week, and was first presented in the UK during Clerkenwell Design Week the following month.

During the festival, which took place from 24 to 26 May 2016, Hubert also unveiled a 3D-printed wheelchair and a range of seating for Moroso with knitted mesh backs.

The British designer relaunched his company as Layer in September 2015. The studio has since launched a charity collection box for Maggie's, a concept wearable that could track individual carbon footprints and a modular screen system made up of triangular hemp tiles.