Architects Manuel Lillo and Emilio Vicedo have completed a bus station in the Spanish town of Santa Pola, featuring a huge metal roof that tapers to form very thin edges on each side (+ slideshow).

Lillo and Vicedo, both based in nearby Alicante, collaborated to design the facility, which is located alongside a busy roundabout at the entrance to the port town on Spain's southern coast.

The building's most prominent feature is the huge canopy, which is supported by angled walls at the rear and a slender column in one corner. The remaining corner reaches out unsupported over the bus stands.

This feature makes the structure much more noticeable than the industrial buildings that dominate the area, helping to passengers to easily locate it.

"The building functions as a landmark because it is a public and general infrastructure located at the very entrance to the town in a place where there aren't any recognisable elements," Lillo told Dezeen.

The building comprises two blocks, one on either side of the bus stands.

The first contains a ticket office and customer services, with a petrol station and shop accommodated round the back. The second houses commercial spaces and offices for the town hall.

As well as the main canopy, both buildings feature an assortment of simple geometric forms. 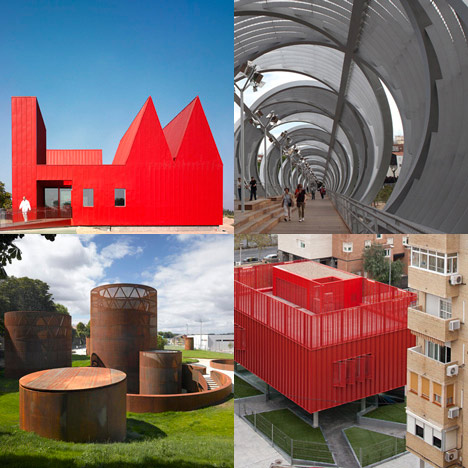 The walls and soffits are entirely clad in profiled sheets of galvanised and lacquered steel, giving the buildings a uniform aesthetic.

"Metal is the prevalent material in the surrounding industrial area," explained Lillo.

"It also allows fast construction, and is thin and light enough to allow large cantilevers in the main roof that provide space for buses and plenty of shadow for the people waiting."

Areas of planting separate the bus station from the road, helping to create a welcoming environment. A garden positioned between the petrol pumps and the bus stands includes trees that reach up through a rectangular void.

The opening in the main canopy allows light to reach the spaces below, while the garden functions as a reference point and a division between the different functions on either side.

Angled surfaces direct visitors towards the entrance of the pavilion that accommodates an indoor waiting area and services. The remaining spaces are largely open, with a few tapering columns supporting the roof.

The second building housing the commercial and office spaces is set back from the road and surrounded by gardens. Its angular form and metallic cladding echo the aesthetic and materiality of the main bus station.

Spain was recently awarded the Golden Lion at the Venice Architecture Biennale for an exhibition highlighting the new "radical" architecture to emerge in the country after the 2008 economic crisis.

Other examples of new Spanish architecture include a house made up of irregularly stacked blocks and a creative workplace in a converted factory.