Timber slats cover the walls and the windows of this house in Isfahan, Iran, allowing light to filter in without compromising the privacy of its occupants (+ slideshow).

Designed by Tehran-based Bracket Design Studio, the house is one a of a growing number of impressive new architectural projects in Iran, in a construction boom triggered by the lifting of economic sanctions.

Named Bagh-Janat, the property is located in a wealthy neighbourhood of the Iranian city that was once the capital of Persia.

The site borders two streets and is overlooked by several multi-storey apartment blocks, making privacy an issue for the client.

In response, Bracket Design Studio designed a inward-facing family residence masked behind a screen of timber slats. These extend across windows and balconies, providing shade and privacy, but still allowing diffused light and ventilation inside. 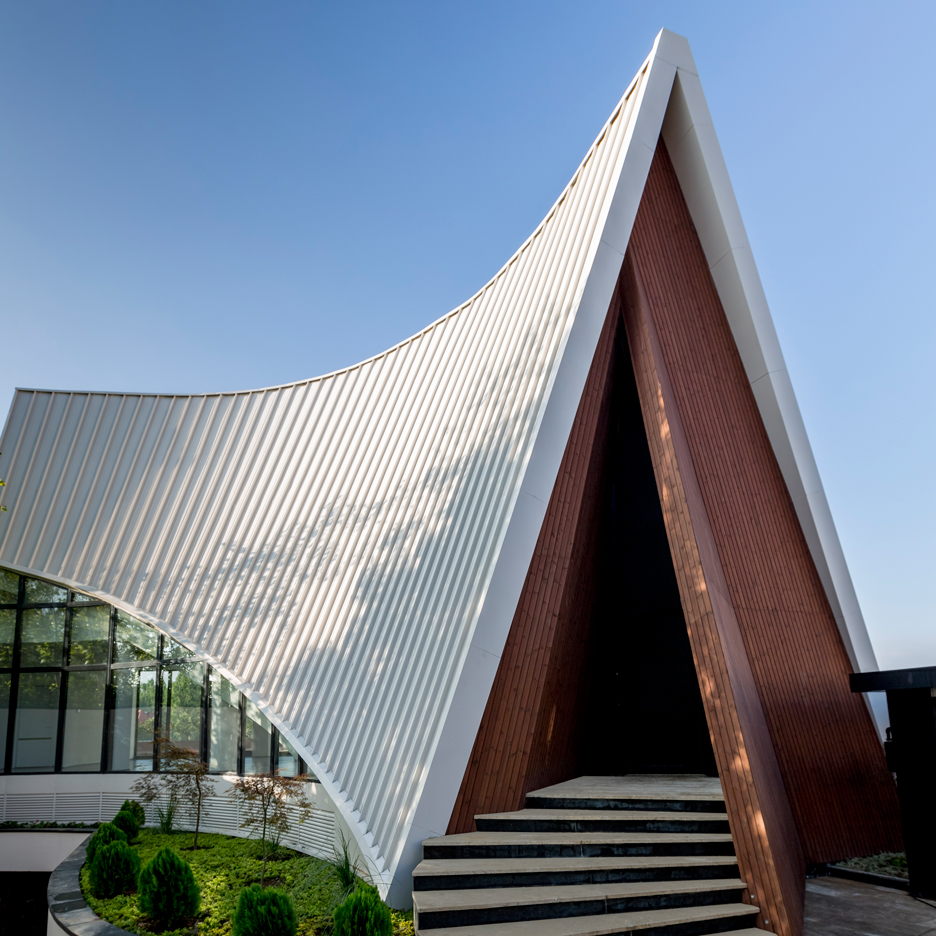 Next Office builds curvy Tehran house that splits in the middle

Other areas of the exterior are covered with slabs of travertine – a pale limestone that is more in keeping with the pale brickwork of neighbouring buildings.

"The wooden stripes cover openings and windows," said the architects. "Combined with the light creme travertine, the materials all fit within the context."

As there are only a few of these timber-screened windows, the architects have also created a large skylight on one side of the structure to bring in extra light.

Slotted between a stone-clad wall and the house's main volume, it draws light down to the basement.

"The mass of the building is shaped according to the design codes, regulations and constraints, in order to provide desirable light and privacy," said the architects.

"The building receives proper daylight from northern and western voids, and also from the setback on the second floor."

The house contains three storeys in total – two above ground and one below. This arrangement helps to keep the building's total height under the seven metre maximum dictated by local planning laws.

Next to a small terrace that is sheltered by more timber shutters, the front door to the house leads through to a lounge space, which faces out onto a small patio through a wall of glazing.

Opposite, a kitchen sits next to the garage that is accessed from the opposite side of the property. A staircase leads to bedrooms on the floor above and an open-plan living room below.

The stairwell is open and lit from above by a large skylight. Thin steps are supported on a steel beam and wrap around the edge of the space, helping daylight to filter down to the lower floors.

Upstairs, skylights also feature in some of the bedrooms, but is frosted to give privacy to the inhabitants.

One of the bedrooms has access to a small private balcony, and there is also a garden on the roof.

Bracket Design Studio was founded in 2006 by architect Shervin Hosseini. According to the team, a house of this size – 305 square metres – is unusual for a city neighbourhood, as these areas have become much more densely populated in recent years.

"Nowadays it is really hard to trace the old big green gardens and palaces there, as all of them have disappeared and been turned into modern apartments during the past 50 years of modernisation," said the Tehran-based studio.

"This has produced a mixture of heterogeneous buildings with different styles, heights, and densities. Among these dense buildings, it is hard to find a single housing or a small lot to develop and Bagh-Janat is one of the few."

Other recent residential projects in Iran include a curvy house in Tehran by Next Office that splits in the middle, and an apartment block by Ayeneh Office that also uses timber shutters for privacy.