The Italian architect and designer was invited to furnish the interior of Appartement N°50 – a flat inside the first housing block of Le Corbusier's iconic Unité d'Habitacion series, one of the most influential Brutalist buildings of all time.

The space has previously been fitted out by designers including Konstantin Grcic, Pierre Charpin and Ronan and Erwan Bouroullec. 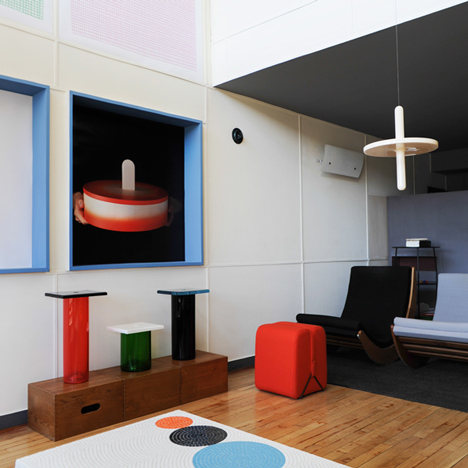 Like his predecessors, Mendini paired the existing decor with some of his own products, including the iconic 1978 Proust armchair, the Amuleto lamp he launched in 2o15 and one of the rugs he created recently for Joseph Carini Carpets.

The designer also installed a few products designed especially for the space, along with some favourite ornaments from his own collection. He described the result as a "delicate performance".

"I was stimulated by the spaces and the brilliant play of light, in addition to the master's use of colour – warm, pictorial and essential to our sensorial enjoyment of the apartment," he said.

One of the most noticeable additions is a series of eight totems, positioned atop the low partition that separates the double-height living space from a mezzanine level above.

Each totem is painted a different colour to match the tones originally chosen for the interior by Le Corbusier and his collaborator, architect and designer Charlotte Perriand.

"I positioned them on the railing that looks out over the living room below, with the aim of creating a diaphragm that acts on the modulation of sunlight," said Mendini.

Both the partition and the side walls of the space are covered in white panels. Mendini chose to highlight these by stretching blue ribbons diagonally across them, matching the colours of the existing wall recesses.

He also positioned a series of objects inside these window-shaped openings, including a colourfully painted coffee pot, a pair of model horses and a set of candlesticks. The aim was to create a cabinet of curiosities, also known as a wunderkammern.

"In the magic of the two blue niches side by side, almost like Wunderkammern, I have placed some small polychrome objects to which I am particularly attached," said Mendini.

"I call this display of mine a performance, because throughout its duration it will be a presence acting with visitors to the apartment, favouring and accentuating their reading of it," he added.

Apartment N°50 is owned by Jean-Marc Drut and Patrick Blauwart, who live in the space. Every summer since 2008 they have invited a designer or studio to overhaul the interior, and invited members of the public to come and look inside.

Photography is by Philippe Savoir and Fondation Le Corbusier/ ADAGP.