BD Barcelona Design has released the final design created by the late architect and designer Alessandro Mendini, who passed away at age 87 earlier this year.

Called Cristallo, the limited-edition design consists of a wooden cupboard in the shape of a trophy, complete with colourful panelling and marquetry.

BD Barcelona Design said that "it's only been a few months" since it requested the new piece for its Art Editions collection, an arm of the company that produces limited-edition runs of furniture and accessories designed by artists.

The company expressed the commission to be a "new thank you" for the work they had completed with the late designer, since they first collaborated on a collection of rugs in the 1980s.

Crafted from MDF and veneered in sycamore wood, the furniture item is coloured in red, blue and green, with a glossy finish.

A graphic print of an intricate white trophy with geometric detailing is positioned across its front, while a circular inlay features on each side.

The inside of the cupboard has a veneered sycamore wood finish and is fitted with shelving. The piece rests on a rectangular dark wooden base.

"Alessandro Mendini is a unique person characterised for his great generosity amongst many of his other qualities. He passed away at the age of 87 leaving behind a huge void," said BD Barcelona Design.

"[Cristallo] is a limited edition and manufactured with care. For us, it is a celebration. History wanted it to be Mendini's last design done throughout his long and rich professional career. Let's drink to him," said the brand.

Mendini is best known for his role in the radical design movement of the 1960s, as well as the postmodern movement that followed.

Over his 60-year career, Mendini produced many influential works of architecture, interior design, furniture and lighting, including the Proust armchair, which is considered one of the most revolutionary chairs of the 20th century.

Other notable projects include the vibrant yellow tower of the Groninger Museum in the Netherlands, and the postmodern Museo di Omegna in northern Italy.

He was also an important theorist, who served as editor of Italian design magazines Casabella, Modo and Domus. 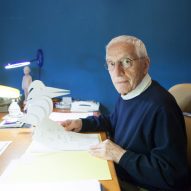 Recent works include a series of aluminium vases by Jorge Penadés and a set of shaggy chairs by Stephen Burks.