Each stone that makes up this fan-shaped memorial by Koishikawa Architects represents one of the 18,000 victims of Japan's most powerful earthquake (+ slideshow).

Hiroya Kobiki and Noritaka Ishikawa from the Tokyo-based studio designed Ishi-no-kinendo to memorialise the 18,000 people who died or were declared missing as a result of the 2011 Japan earthquake, which caused widespread devastation in the northeast of the country in March 2011.

The architects have positioned the small 6.5-square-metre structure on a hillside between a temple and a cherry tree in Ishinomaki, a city badly affected by the earthquake.

"Ishi-no-kinendo is built as a space where people can pray for the nearly 18,000 people who are missing or died in the Japan Earthquake," said Kobiki and Ishikawa.

"The number of laminated stones represent the victims, and visitors can think of each of the victims as well as the entire east area of Japan."

Slender pieces of stone were stacked to form the memorial's curving walls, while its sloping top is made from mirrored stainless steel and slate shingles. A shrine set into the front of the structure can be used to offer flowers or burn incense. 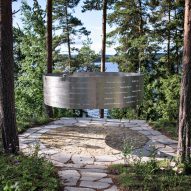 Building materials were taken from a nearby house demolition – intended to help the memorial to mirror the local vernacular.

The structure's mirrored top is etched with radiating lines that indicate the locations of other badly-affected areas, including Miyako, Kamaishi, Minamisoma and Rikuzentakata. This allows visitors to face towards the place where their prayers are intended for.

"The shape of the building indicates heavily affected areas, so people can pray for each of the victims as well as the entire east area of Japan," explained Koishikawa Architects.

The mirrored top is intended to reflect the blossom of the nearby cherry tree, which blooms each spring, around the time of the natural disaster hit the region.

"Because the cherry blossoms are reflected in the mirrored stainless steel, people remember that day every year in spring," said the architects.

Photography is by Koji Fujii/Nacasa & Partners.