Opinion: the imaginative but unrealistic proposals for Detroit on show at this year's Venice Architecture Biennale have left Aaron Betsky wondering if there is hope for architectural projects among the city's ruins.

"In this era of media and migration, can architecture still ignite a collective imagination?" That was the question Cynthia Davidson asked herself when she teamed up with former University of Michigan dean Monica Ponce de Leon in curating the American Pavilion at this year's Venice Architecture Biennale: The Architectural Imagination, on view through 9 November 2016.

To answer their rhetorical sally, they asked twelve design teams, selected from hundreds of applicants, to address three sites in Detroit. The results turned out to be varied, but also surprisingly unified. A question aimed at something that is by its nature open and explorative and a method that gathers various approaches to different sites would mandate diversity, but most of the designs are large structures with forms that were tortured as much by computer programs as they were by the realities of the site, while he uses of these shapes are all generically do-gooder.

The answer to Davidson's question, then, I am afraid, must be no. There is nothing in these images that I think will evoke any public reaction beyond puzzlement, shading over either into a dread caused by the unfamiliarity of these forms or a delight at their exuberance. At the same time, the exhibition is a rare moment of free invention in a Biennale otherwise devoted to measured responses to real-life problems.

As chance would have it, these formal contortions are on display inside the neo-classical framework of the American Pavilion, while right outside the Chilean firm Pezo von Ellrichshausen shows what a truly free architectural imagination can do: create a labyrinth of green-painted walls that undulates through its park setting, offering no program and little purpose other than the delight of spaces caught at intersections of arcs, vistas past cascades of curves, and views to slices of the Venetian sky.

The issue, which Davidson and her collaborators parsed out in detail in the accompanying publication cataLog – an issue of the Log magazine that Davidson edits – is that there is question about the need or form of imagination in relation to both the physics of architecture, and the abstract demands of function and social relations buildings frame.

"I would argue," Davidson says in her opening essay (which, like much of Log still falls back into the architecture theory jargon that first became popular in the early 1990s), "that the architectural imagination is a staging ground for action, with the potential to engage individual subjectivities and cultural movements." 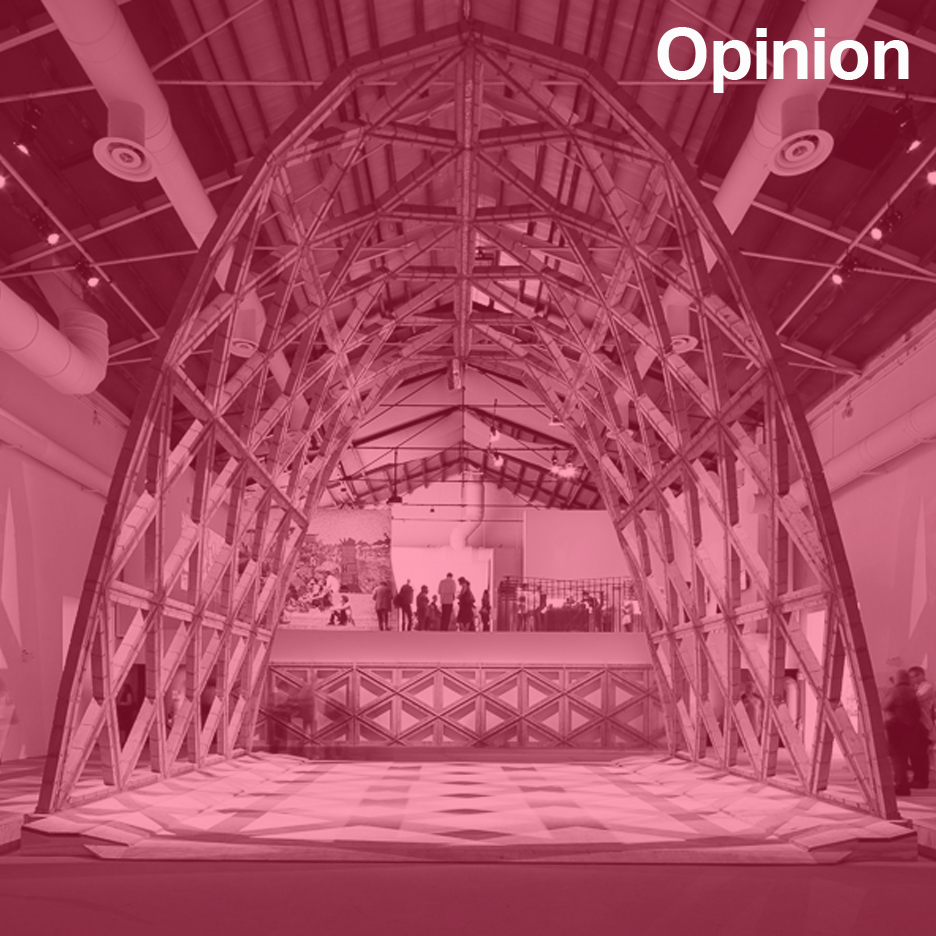 "Is architecture really as guileless as Aravena's Biennale suggests?"

But what is a "staging ground?" It appears to be images that suggest other things. She then points to the paradoxically insubstantial nature of those images or images of potentials as being that which animates the dead-corpse architecture – both in terms of its material, extracted from the living earth, and in terms of its traditions and codes – into a living thing.

While some of the other authors whose essays appear in cataLog offer alternative suggestions – most notably Sylvia Lavin, in her careful picking apart of the intentions and process of construction of the infamous gilded antenna Robert Venturi placed on the facade of Guild House, the retirement home he designed between 1960 and 1963 – the thesis the exhibition and catalog further is actually a familiar one.

It relies on a "staging ground" that has been a central part of the discipline at least since the Ecole des Beaux-Arts formalised professional training: that of the project. Neither utopian nor responding to limited conditions, the project is a peculiar hybrid that combines "what if" with already familiar building blocks into an architecture that is by its very definition not real, but offers an image of reality as the author thinks it could and should be.

The advantage of such an approach in training is evident. The architect has to learn how to respond to the complexity of situation she or he will be asked to condense into a built artefact, and thus proposing what such a set of conditions might be is the best way to learn in a manner unfettered from the solutions others have already built.

The project is also an escape valve for architects who feel constrained by the role in which they find themselves, responding to set parameters with little chance of variation. Architects dream that such projects are finally also ways of changing that reality. By showing what might be, they hope to open the eyes of clients, public, and regulators alike, clearing out new vistas that they can they plan.

There are very few examples indeed of such a gambit working. Probably the most famous is Daniel Burnham's Chicago Plan of 1909, which did lead to major infrastructural and open space improvements that set the city on a new path, and which continue to define much of its downtown and park system. This was a vision that was as much social and economic as it was aesthetic, however, backed by reams of analysis and calculations, and what it did render in forms was familiar, as it hewed closely to neo-classical ideals and ideas that were central to existing urban planning.

That is the central problem with this exhibition. Despite an excellent, but rather short and sweeping essay on Detroit's history by Robert Fishman, there is little or no evidence of any analysis that underlays these proposals, while the forms they take will be unfamiliar to almost everybody living in Detroit today.

Even those, such as Marshall Brown, who eschew contortions, produce images that will not so much inspire as they will puzzle. The images are beautiful, but also familiar, but only to those steeped in the culture of architecture education and avant-garde practice. There is little here that traces, tracks, or explores Detroit as a physical form, and even less that is a revelation.

The only project that comes close to realising its limitations and turning them into a strength is that by Mack Scogin Merrill Elam Architects, which says that "what we have done is establish the principles of an architecture that embodies that which has made [the Mexicantown project] such a special place".

Their project is self-avowedly not a building proposal, but a collaged "collection of bric-a-brac" from their site, drawings that are "registrations…of a fictive future", and a model that they call a "translation device, giving physical form to the non-obvious". What they have done, in other words, is not to invent something new from their own imagination, but to observe, collect, analyse, and rearrange bits of their site so as to re-imagine what already exists.

For all that, The Architectural Imagination has the great value of not only breathing some fresh life into an old tradition in architecture, which seems to have been buried by too many algorithms and efficiencies in ways in which architecture is taught and practiced, but also producing images and forms proper to architecture that offer a different vision for Detroit.

Trained as an architect and in the humanities at Yale University, Betsky was previously director of the Cincinnati Art Museum (2006-2014) and the Netherlands Architecture Institute (2001-2006), and Curator of Architecture and Design at the San Francisco Museum of Modern Art (1995-2001). In 2008, he also directed the 11th Venice International Biennale of Architecture.