Construction of a metal-clad residential tower in Brooklyn by Mexican architect Enrique Norten is almost finished, with tenants slated to move in by the end of this summer.

Called 300 Ashland, the apartment building is situated in Fort Greene, a vibrant district that is home to the Brooklyn Academy of Music performing arts venue. It was designed by Enrique Norten, founder of TEN Arquitectos, which has offices in New York and Mexico City.

Renderings show a silvery building that appears as a thin, wide bar with a large setback and a perforated facade. The tower is being constructed on a triangular piece of land.

The 32-storey building emerges from a sculptural podium containing cultural and retail space, with one side resembling a ship's bow.

"The tower and building base are unified by a continuous folding skin of perforated metal, which will pick up the colours of the surrounding streets, buildings and sky, and thereby putting the focus where it should be – on the activated streetscape and life of the city," the firm states on its website.

Also at ground level is a large plaza – designed by local landscape architect Grain Collective — that steps upward. Beyond serving as a place to relax, the plaza is intended to be used for performances, film screenings and farmers' markets.

"The building base is a series of exterior, terraced levels that create an active, urban and public experience along Flatbush Avenue," the firm said.

"With several public entrances, the porous building aims to facilitate an easy flow of people into and out of the cultural and retail spaces."

The developer has completed model units within the tower and began leasing apartments this week.

Per city requirements, 76 of the units are designated affordable and will rent for below-market value. 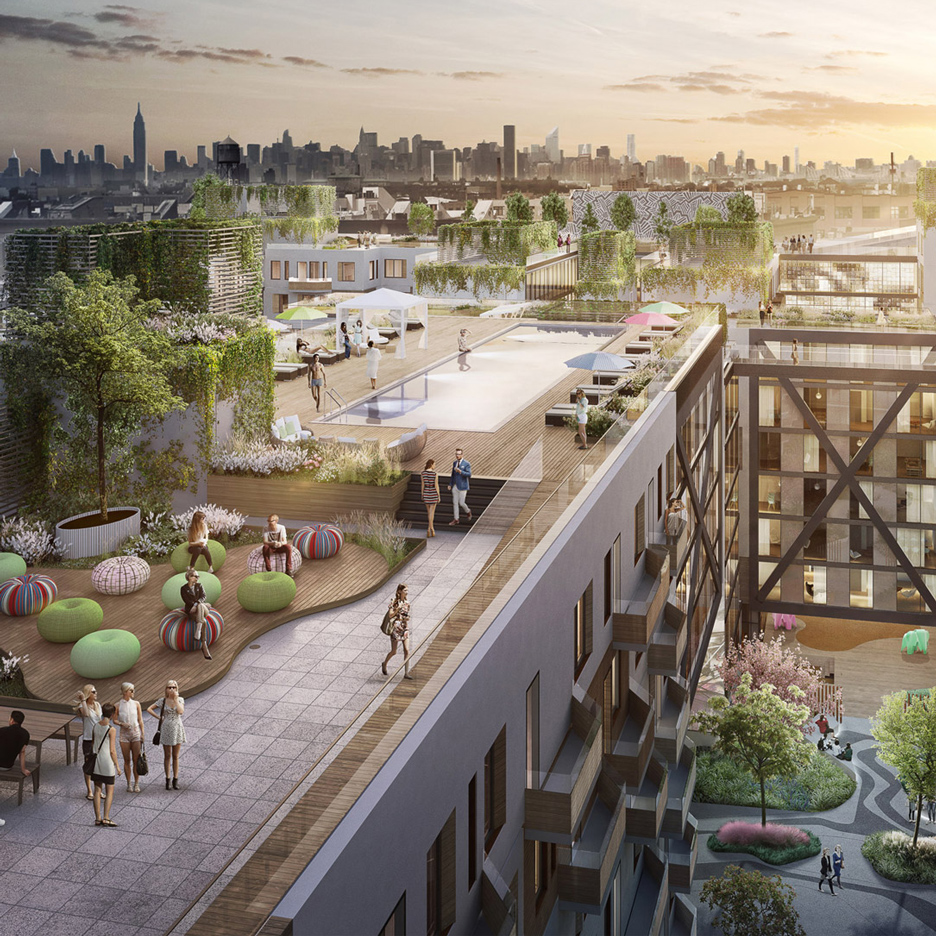 Amenities include a 24-hour concierge, a fitness centre and a roof terrace designed by James Corner Field Operations, one of the studios behind the famed High Line park in Manhattan.

The terrace, located on the 29th floor, features verdant planters, small lawns and a trellis structure.

The building is located just south of the Williamsburg Savings Bank, an iconic Brooklyn tower dating to 1929. It also is near the Barclays Center, a sports arena by SHoP Architects, and the Pratt Institute, a leading art and design school.

The project is backed by Two Trees Management, a developer known for playing a key role in redeveloping Brooklyn's Dumbo neighbourhood.

Other Brooklyn projects now underway include a skinny, supertall tower by SHoP in the downtown district, a waterfront office development in Red Hook by Foster + Partners and a fire station with bright red details by Studio Gang.

TEN Arquitectos is best known for its projects in Mexico, which include a new art and design university campus, an undulating public square and a boomerang-shaped museum.