Nike has redesigned its existing Magista football boot by imagining what a foot would look like had it evolved specifically to play football (+ slideshow).

The boot, which now features a mid-height collar and Nike Flyknit technology, aims to further the boot's tactility, allowing players to better feel the ball.

"We envisioned the upper of the Magista 2 performing as an organic extension of the foot," said Phil Woodman, Nike's football designer. "The texture is podular and cushioned, designed to communicate with a player's sense of touch when the ball comes in contact with it."

"This is the next step in the application of Nike Flyknit," he continued. "The pixel precision of Flyknit makes it possible for us to create dimension without adding weight or overlays."

Woodman worked alongside the company's Sports Research Lab to define which parts of the foot are most sensitive to touch. The team then compared these sections against areas most exposed to ball contact, which they gleaned from slow-motion film study of ball control.

This data was visually applied to a foot model in the form of a heat map to reveal any significant areas of overlap. The colours of this heat map were also used to decorate the upper – something Woodman describes as an "iconic aesthetic that's unlike anything else on the pitch". 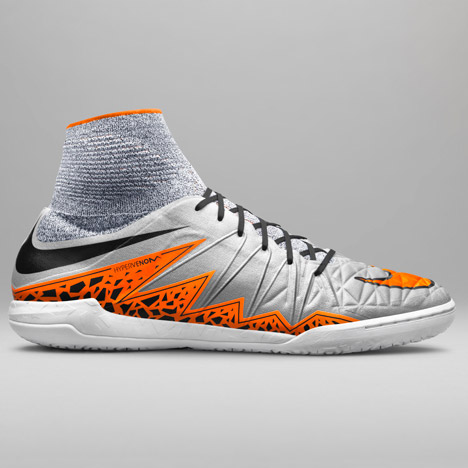 Using this information, Woodman began 3D-printing uppers that featured cushioned areas designed to react with a player's sense of touch.

The highest peaks, measuring 4.5 millimetres in thickness, are in the most prominent contact areas of the boot, and are aligned with where the foot should come in contact with the ball.

This technology was also used for the Dynamic Fit Collar around the ankle, which has been designed to accommodate the shape of the bone while dipping lower on the tendon for comfort.

Light padding under the laces has replaced the boot's tongue – providing the wearer with coverage in this high-contact area.

On the sole of the shoe, studs were reconfigured based on traction patterns that players make, with some incorporated for a specific use, including half-conical-shaped studs for acceleration and chevrons around the ball of the foot for rotation.

Nike previously fused its Flyknit technology with a protective mesh to update the Hypervenom football boot, and created a new version for street use.