Located in the Bunkyō district, the cathedral was designed by the Japanese architect to reference the lightness of a bird and its wings.

It is one of Tange's most famous buildings. Sumner, who photographed the building in April 2015, described it as "Modernist brutal classic". 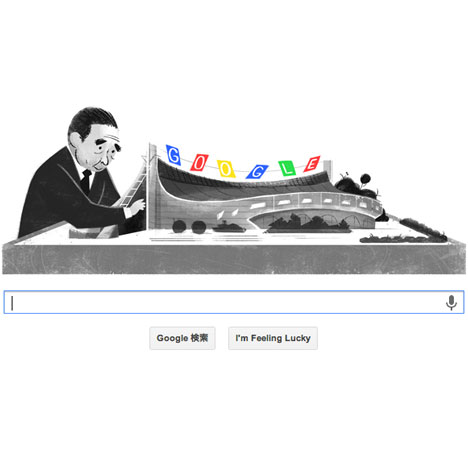 "It's something I had been meaning to shoot for years – a classic but still not as widely known as it should be," he told Dezeen.

Completed in 1964, the cathedral is the seat of the Roman Catholic Archdiocese of Tokyo. It replaces the original wooden structure, which was built in 1889 and destroyed during World War II air raids.

The design is based on the traditional cruciform plan of cathedrals. Tange used the crucifix as the frame for the sculptural shape, which features eight wing-like walls that fold inwards and upwards to support the cross-shaped roof window.

These windows continue vertically as four glazed facades where the walls meet.

The profile of the wings is angled –  each one reaches a different height – meaning the roof windows are slanted. This provides the dark concrete interior with different directions of light during the day.

There is also a 61.6-metre-high bell tower that stands a short distance away from the main building.

In addition to St Mary's Cathedral, Tange's most famous buildings include The Hiroshima Peace Center and Park, the Tokyo City Hall Complex and the 1964 Olympic stadium in Tokyo.

Tange is also recognised as a founder of the Japanese Metabolism movement that grew in 1960s Japan, following a period of economic recovery. He passed away on 22 March 2005 and Tange Associates continues in his legacy.

Edmund Sumner is a London-based architectural photographer. He has also produced images of Tadao Ando's Casa Wabi on the Mexican coast and a cloud-shaped nursery by Junya Ishigami.