Global architecture firm HOK has created a conceptual proposal for a fleet of drones that would serve as a portable hotel, enabling access to far-flung locales (+ slideshow).

Called Driftscape, the scheme calls for using drone technology to create mobile pods that can be flown around the world and placed in areas not typically conducive to building a hotel.

The design was recently named a finalist in the Radical Innovation Awards, which are given to designers who conceive forward-thinking ideas for the hospitality industry.

"The Driftscape hotel allows guests to experience breathtaking locales from the comfort of their personal Driftcraft," said the design team, which is based in HOK's Toronto office. "While inside the unit, guests have the ability to experience a pre-selected excursion path of their choosing."

"Roam the plains of the Serengeti, hover over the Grand Canyon or drift through the Pearl Waterfall in China," the team added, noting that the aircraft would be operated by a central navigation system.

The scheme calls for two types of modular units. One, called the Driftcraft, would measure approximately 205 square feet (19 square metres) and would contain a guest room for two adults.

At the touch of a button, an "observation zone" would be transformed into a lounger or bed. Adjustable side tables would provide surfaces for eating and personal devices. A three-piece bath would offer a sink, shower and water closet.

"Operable hatches allow guests to experience the world outside while drifting or at rest," the team added.

Each pod would be equipped with an interactive station with details about operational features and guest activities, in addition to providing a direct line of communication to a central command station. 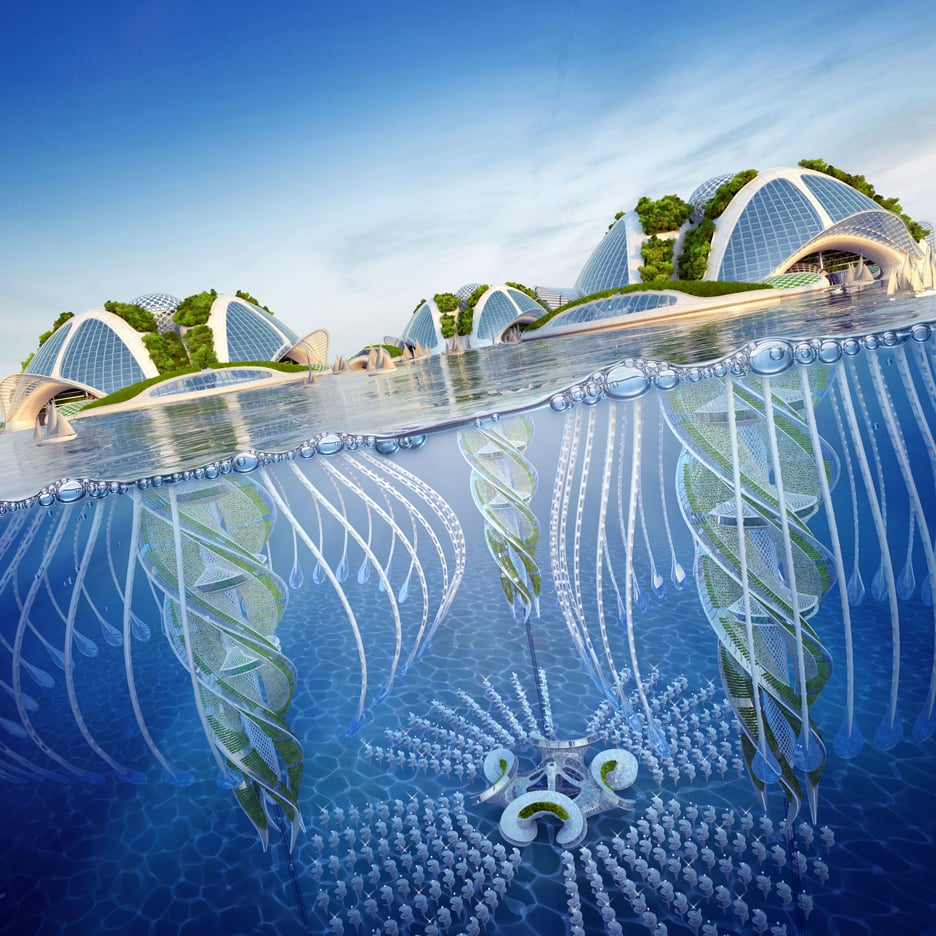 The other modular unit would encompass 2,500 square feet (232 square metres), and would contain support services and amenities.

The design calls for connecting three of the larger pods to form an Oasis Base. This cluster would offer a communal lounge, a restaurant and a courtyard.

The transparent pods would consist of polymer walls and a lightweight structural system.

"The fabrication of the Driftcraft uses aerospace alloys to create lightweight, reinforced structures for stability," HOK said. "High-impact polymers are used to create a transparent volume to provide guests with 360-degree views of their surroundings."

The transparent pods would not only provide an immersive experience for guests, but would also have minimal to no physical impact on the environment, according to the firm.

"Each unit is fitted with 'self-levelling' pneumatic support anchors that retract from the base," the team explained. "They allow the Driftcraft to safely perch on any terrain without negatively impacting the site."

The pods would offer plumbing and electricity via bio systems developed by the aerospace industry.

The Driftscape concept was inspired by the intrinsic desire within humans to "set off on an adventure, to leave all comforts behind and wander in pursuit of the unknown", said HOK.

Unmanned aerial vehicles have been earmarked for a wide range of uses, and are currently undergoing tests to become delivery networks, passenger vehicles and surveillance systems.

Other ambitious hotel proposals include a floating snowflake-shaped design for viewing the Northern Lights and an airship with guest rooms that looks like a whale.