Opinion: a temporary installation around a plinth that once hosted an infamous statue of Lenin in Ukraine accidentally highlights a deeper problem facing the city than what to do with the relics of Soviet rule, finds Owen Hatherley.

This month, the Mexican artist Cynthia Gutierrez staged an "intervention" in a public space in Kyiv, Ukraine.

Called Inhabiting Shadows, it was one of several alterations, additions and engagements that have been made upon the city's former Lenin statue. The statue was erected in the 1950s in a prominent spot at the end of the tree-lined Taras Shevchenko Boulevard – facing the late 19th-century Bessarabian Market across the city's Broadway or Oxford Street, the Khreschatyk – and pulled down in 2013.

Before the artwork was placed there, the plinth, still in place, was smeared randomly with blue and yellow paint; of the two quotations from Lenin embossed with gold, the one on "Soviet power" was scribbled out, the other, on how "a free Ukraine can be built only with unity of Russian and Ukrainian workers", was untouched. An impromptu plaque was nailed to the plinth, commemorating Sashko Bily, a fascist who was shot in suspicious circumstances in 2014.

Gutierrez's project replaced all that with a lightweight construction that enabled members of the public to climb up to take the place formerly occupied by the bronze likeliness of Vladimir Ilyich Lenin.

For the time you were up there, you were the monument

You could take in the view "Lenin" once saw (but nobody else could), you could emulate his imploring pose, you could shout to friends. For the time you were up there, you were the monument.

For Izolyatsia, the formerly Donetsk-based gallery who commissioned it, this work was a way of sidestepping the heated politics of memory of the city and country, in favour of asking another, more interesting question – what should an urban monument be today?

In the gallery's press release, Izolyatsia invited the public to "substitute the phantom" of Lenin, in order to "become new and diverse moving statues that head towards the light of a new horizon". 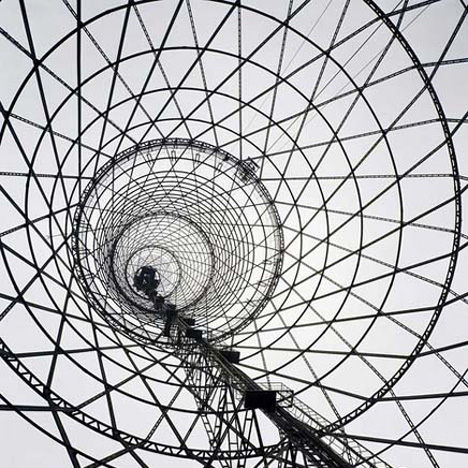 In trying to express an idea (about democracy, openness, temporariness) rather than commemorate a man, this post-revolutionary monument is in the tradition of one of the first monuments proposed after the 1917 revolution – Vladimir Tatlin's Monument to the Third International, which intended to symbolise the dialectic and revolution through its intersecting, spiralling parts.

While that was a utopian proposal that could only feasibly be implemented after the World Revolution that Tatlin fervently believed was possible when he designed the project in 1919, here we have something much more tentative, deliberately short-lived and ad hoc.

The Ukrainian government responded to a popular wave of toppling Lenin statues by passing a law guaranteeing removal of all Soviet symbols, statues and names

But the words used to describe Tatlin's project by the poet Vladimir Mayakovsky apply equally to Gutierrez's work: "the first monument without a beard". Perhaps, an approach like this could be taken to the other charged debates over statues elsewhere in the world – a ladder allowing people to occupy Cecil Rhodes's little niche in Oriel College, Oxford, for instance.

The way in which the project sidesteps the emotive debates over monuments in Ukraine has become crucial to Izolyatsia's work. They were forced to leave Donetsk at the start of the war fought between Russian-backed forces against the Ukrainian government. Their gallery was used by the army of the Donetsk People's Republic for storage, the "pornographic" artworks in their collection used for target practice.

But rather than wholeheartedly endorse the new politics of memory that has emerged after the Maidan insurrection of 2014, they've used their new platform, in a dockside ex-factory in Kyiv, to encourage a more sensitive approach.

Recently, the Ukrainian government responded to a popular wave of toppling Lenin statues (known as Leninopad or Leninfall, a pun on Lystopad, the Ukrainian word for the month of November), and a scattered but influential enthusiasm for its wartime far-right, by passing a law that guaranteed all Soviet symbols, statues and names had to be removed (excepting those connected with the second world war).

It's a 'nation-building' project of a classic kind

It also decreed that Ukrainians "honour the memory" of any and all fighters for Ukrainian independence, including the practically genocidal Bandera faction of the Organisation of Ukrainian Nationalists.

Unsurprisingly, this has made an already heated situation worse, with residents protesting as some statues are removed, others making plans to honour the new official idols. It's a "nation-building" project of a classic kind, building in a compulsory conception of history through interventions into public space.

Izolyatsia are hardly sympathetic to the rebels who forced them out of their hometown. Instead of defending Soviet monuments as such, their work has tried instead to bring nuance to the debate.

One of their projects is to catalogue and conserve the polychromatic mosaics that were placed on many public buildings between the 1960s and 1980s – one of the few places where artists could combine propaganda and abstraction.

The monuments project, Social Contract, entails, as well as Gutierrez's city centre intervention, an exhibition at their gallery. The works there, by artists from Poland, Bulgaria, Russia, Israel, the Netherlands, Columbia, Mexico, take critical, ambiguous, ironic approaches to the question of the authoritarian, grandiose monuments bequeathed to cities around the world since the first rise of nationalism in the 19th century.

Steps leading down from Lenin take you to a shopping centre, one of many crammed into every available space in the Ukrainian capital

In the contribution by Luchezar Boyadjiev, plinths of horse-riding leaders and warlords stand with the human figures photoshopped out, their horses and thrones suddenly headless. The hope is that these sorts of critical commentaries and oblique interventions like Inhabiting Shadows can show that conceptual art has something to provide that totally avoids the compulsory nation-building politics and retrograde sculpture that still besets Ukraine and many other countries.

Steps leading down from Lenin take you to a shopping centre, one of many crammed into every available space in the Ukrainian capital.

At first, it seems like just any other of these, where the spacious thoroughfares of the Soviet city were filled in by people, then businesses, selling whatever they could. But go deeper in, and it opens out into a multi-level underground atrium, with a lift passing between floors, like a full-scale suburban shopping centre.

This is a city where any and all public space is seized upon by parasitic capital. As an image of what power really is in Ukraine – and elsewhere – it serves so much better than the melancholy, anachronistic figure of V I Lenin. But unlike a sculpture on a plinth, it's not so easy to depose.