Ortner visited seven former-Soviet territories including Uzbekistan, Azerbaijan, Georgia, Armenia, The Crimea Peninsula, Ukraine and Moldova to create the Back in the USSR book.

Unlike the grey concrete buildings often associated with socialist architecture built throughout the 20th century, Ortner found an eclectic, colourful micro-architecture that emerged on the roadside.

Described as "jewels", the bus stops allowed the architects to experiment free from the pressures of socialist Moscow.

"This under­lines the autonomy of the republics and ostensibly goes against the central­ism of Moscow," said Ortner.

"It seems as if a little free space for architecture opened up here, in the face of all centralistic planning."

In Uzbekistan he found a trio of blue-hued pavilions – one with painted brickwork highlighted by accents of red and yellow, and another with three poles supporting up-turned roofs.

For the third, two walls angle together to form a triangular cover above a pair of benches.

He then branched out in the Caucasus, leading from the Georgian Military Road. Here he found a curved brick shelter topped by a rounded canopy, and a roughly rendered structure with a blue and white striped bench.

In the Armenia spa towns he captured a brick shelter with a pointed winged roof that parts in the centre. Another colourful mosaic shelter has a long window that offers views to the sea behind.

Ortner wanted to document the buildings as a series to compare their differences, and so aimed to use consistent perspectives and illuminations.

But he found a number of obstacles in his way, including the change in backdrop and people using the shelters.

"Owing to the large distances, the dense traffic in some places, and the escalating number of objects, mistakes occurred," said Ortner.

"The light changed on the way from the central Asian steppe to rainy Moldova, along with the fauna and the surrounding landscape," he continued.

Two corrugated-metal structures also feature in the series, including a tubular shelter places on its side and another with a roof made up of six linked volumes painted red underneath.

On the Black Sea coast in the Crimean he spotted an intricately designed shelter with a covered area topped with a temple-like roof, before he meandered on to Ukraine.

Last up was Danube in Moldova, where a stop with a black-and-white mosaic design sits against a backdrop of rolling fields.

Back in the USSR – which is available from Jovis – is not the first photography series to investigate the topic of Soviet architecture. 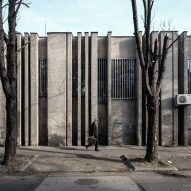