The Boffi_Code allows customers to tailor kitchen and bathroom compositions to their choice of materials and layout.

Although first displayed at this year's Milan design week, the products will be officially launched in the UK at the brand's Chelsea showroom during the London Design Festival 2016.

Boffi will present the kitchen unit with grey marble worktops and doors in abonos oak – a fossil wood from Eastern Europe found in rivers or lakes.

"This wood is characterised by a distinctive gradient colour varying from dark brown to almost black depending on the age of the tree," said Boffi. 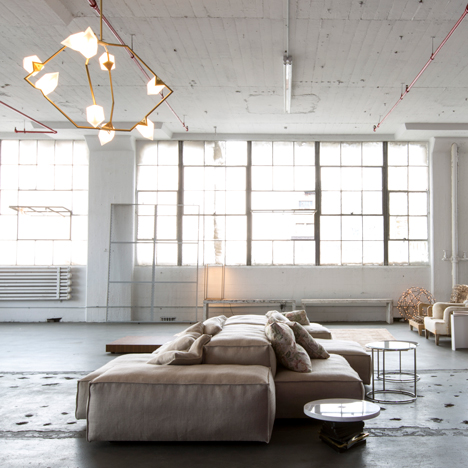 The bathroom range features units with box-joint drawers and open compartments. The units are compatible with standard top-mounted sinks or Lissoni's Garden washbasin, made from a steel sheet.

The Garden washbasin will be used in Boffi's showroom display, matched with a bathroom unit in new natural oak and a grey marble top.

The products will be on show during the London Design Festival, on from 17 to 25 September 2016.

Other events during the city-wide festival include an exhibition of work challenging the stigma of dyslexia, and another showcasing Norwegian designers.

During last year's event, Boffi launched a range by Spanish designer Patricia Urquiola, based on the kitchen in her grandfather's house.

More from Piero Lissoni and Boffi