Opinion: meaningful architectural reactions to crises may take time, but quick temporary structures can be just as effective, and both are far preferable to not responding at all says Mimi Zeiger.

I admit it; I've retreated. In the midst of a scorching summer of bigotry and violence, where every day serves up another horror at home and abroad, I've taken to bed. I soothe myself with heavy doses of the genteel diversity pictured on The Great British Baking Show (or Bake Off in its homeland), where layers of pastry unify a country polarised by Brexit.

Other nights I indulge in Mr Robot, caught up in a world of digital unrest where the hackers are good guys operating in the name of equity, not a possible foreign power trying to disrupt an election.

As I binge watch, as I do nothing, my mind spins on the question: how might architecture and design step up to the plate in a time of crisis? The list of cities impacted by shootings and terror attacks grows steadily – Orlando, Bangladesh, Nice, Istanbul, Baton Rouge, Dallas, Munich, and so many more.

My privilege is uncomfortable and it makes me vague and slow. Despite Donald Trump's fear-mongering rhetoric, I know that I can occupy cars, cafes, promenades, airports, nightclubs, churches, and malls with limited fear or harassment.

Construction's long lead-time is a natural pause for reflection

Architecture can feel like a paltry gesture in times like ours – times where the news cycle and social media conflate national and international politics with terror attacks and senseless killings of unarmed black men and on-duty police. Times when all crises is crisis. Times when the augmented reality of Pokémon GO represents the gamification and continued commodification of urban life, not the undoing of discriminatory practices that regulate public space.

Architecture as a practice is better equipped to respond later, much later, to create places of memorial, commemoration, and mourning. Construction's long lead-time is a natural pause for reflection. 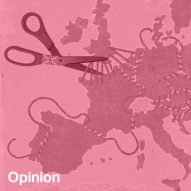 "We could imagine nationhood as a design project"

Often, it's productive to look backwards – to draw examples from history. In early 2015 in response to the events and protests in Ferguson, The Aggregate Architectural History Collaborative published a series of essays on space and race – from Jim Crow-era segregation to redlining, from streets to prisons – that "put Black lives at the centre of our thinking about architecture and its history".

And architecture? Despite its inherent lethargy, architecture is a galvanising force for those out for political gain. This election season there's incessant boasts of walls and bridges. Fifteen years before Donald Trump called for a border wall to be built between Mexico and the United States – an architectural imaginary unconstrained by economic or diplomatic practicalities – he proposed a building on the World Trade Center site bigger and taller (and more profitable) than Yamasaki's Twin Towers.

On 17 September 2001, just days after 9/11, but long enough for Trump to crow and flap, Ada Louise Huxtable called his hubristic defiance "inappropriate and obscene".

"The skyscraper as a symbol refuses to die," she wrote in the Wall Street Journal. "This is not about renewal or regeneration – concepts that will be widely championed – it is about memory, and the need to think in terms of solutions of the kind that have determined the splendour and meaning of cities throughout the ages. Development is not destiny."

By default architecture is having an entropic moment

But memory is short, and as SOM's One World Trade Center towers over Lower Manhattan like a blue-glass phoenix rising from the ashes and Santiago Calatrava's $4 billon PATH station provokes debates about its value to the city and to architecture in general, we get a news report that an Apple store will open under the transit hub's Oculus – a nifty real-estate "get" for the Port Authority.

The store will likely become a tourist destination in its own right. The splendour and meaning wished for by Huxtable is not rendered meaningless, but meaning is transferred from an architectural gesture established in public space to the haptic space of the iPhone screen. Just like Pokémon GO.

"Instead of causing us to remember the past like the old monuments, the new monuments seem to cause us to forget the future," wrote artist Robert Smithson in a 1966 issue of Art Forum.

In his essay Entropy And The New Monuments, he mused on the emergent work his contemporaries Donald Judd, Dan Flavin and others and noted how their artworks – in keeping with a late-modern culture – were devolving from being objects to being about time, stillness, and going nowhere.

Even though the buzz of our globalised economy and the rapid heartbeat of media (it's all social now) might suggest otherwise, it could be argued that by default architecture is having an entropic moment. The constraints of policy, institutional politics, discourse, or budgets contribute to this personal and/or collective entropy – a sluggish digestion of culture through architectural form.

Meaningful response is a deliberate process

The events of 11 September 2001 featured large in both the Republican and Democratic national conventions. A decade and a half later, the attack still fuels polarised rhetoric: fear and xenophobia, memory and resilience.

In December 2001, Herbert Muschamp wrote in The New York Times about a set of four viewing platforms erected on Fulton Street to provide visitors a way to see Ground Zero.

Many might remember the simple ramped structures (designed by architects David Rockwell, Kevin Kennon, Elizabeth Diller, and Richard Scofidio), which, in retrospect, are notable less for their architectural accomplishment, than for their remarkable ability to have been built at all given the bureaucracy and security concerns swirling around the site.

Finished just months after the towers collapsed, these temporary structures suggested that response was possible. Muschamp praised the design for its stoic and essentialist nature, and wrote: "Stop the mystification, the grandiosity, the use of architecture to disconnect our history from ourselves."

Today we've nearly lost count of the number of sites that might require a viewing platform. It's difficult to imagine a lavish memorial outside The Pulse, or a monument in the St Paul, Minnesota suburb when a live-stream video loops the violence.

Like Huxtable, Muschamp concluded that with Lower Manhattan there was no need to rush. Meaningful response is a deliberate process. Slowness, however, is not the same as the lack response. We still need to get out of bed.

Mimi Zeiger is a Los Angeles-based journalist and critic. She has covered art, architecture, urbanism and design for a number of publications including The New York Times, Domus, Dwell, Architects' Newspaper, and Architect.