Vollenweider and Ng designed Inefficiency Machines for the Information Experience Design masters programme at the Royal College of Art. The installation features three electronic devices that visitors must power by exaggerated body movements.

Visitors are invited to turn on a television by jumping up and down repeatedly on a trampoline, light up a bulb by pounding with a pestle in a mortar, or power a hairdryer by screaming into a microphone.

"This project is all about energy and efficiency and how we take electricity for granted," Vollenweider explains in the movie, which Dezeen filmed at the ShowRCA 2016 graduate show in London.

Each of the installations features sensors, which translate human body movements into electricity. 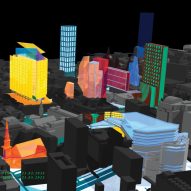 The faster visitors bounce, the harder they pound, or the longer they scream, the more power will be provided to the appliances.

After each activity, visitors receive a printout stating how much energy they generated and comparing it to the average energy consumption of the particular appliance they were attempting to power.

"The visitor receives their personal efficiency results for them to realise how much it actually takes to power those consumer products that we have," Vollenweider says.

Vollenweider and Ng hope making people power consumer products with physical human exertion will make them think twice before leaving a light or television on in a room they are not using.

"We just flick a switch and take [electricity] for granted," she explains. "It's like an invisible thing in our culture that we wanted to make more tangible."

She concludes: "We hope that people will become much more aware and change their relationship to those consumer objects and maybe even consume less in the end."

This movie was produced by Dezeen for the Royal College of Art.

Inefficiency Machines was on display at the ShowRCA graduate exhibition, which took place from 26 June to 3 July 2016 at the Royal College of Art's Kensington campus. Dezeen was media partner for the event.