Shanghai architects TF and PPAS have built a set of sprawling concrete structures that will be used by visitors to an agricultural park on the outskirts of the Chinese city (+ slideshow).

The new structures provide a public meeting area for the Modern Agricultural Park in Jinshan, southwest of the city.

This 153-square-kilometre park, created a decade ago, functions as a demonstration area for both traditional and innovative farming methods. This includes fruit and vegetable cultivation, dairy and fish farming, and livestock breeding.

TF and PPAS were tasked with creating a structure that could serve a number of different functions. It needed to link up various different areas of the park, but also to frame different activities for visitors.

To achieve this, the two studios developed a design based on the verandas that traditionally frame Chinese courtyard houses. 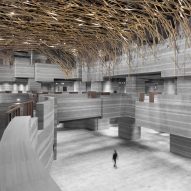 "The veranda, an essential element in traditional Chinese gardening, has been selected as the theme of the design," explained PPAS, which has offices in Germany as well as China.

"Replacing the expensive and complex wooden structure of a traditional veranda, a simple concrete structure will not only harmonise the agricultural environment and the surrounding modern facilities, but will also effectively ensure that the project costs less than €80 per square metre," said the team.

The main structure, called the Veranda, is divided up into three sections – one in the shape of a zigzag, one V-shaped and one in a straight line. It incorporates roof canopies, viewing decks and seating areas.

There are also four small concrete pavilions dotted along the northern edge of the site, which function as observation galleries.

Pathways and grass banks frame these buildings, screening the space from the adjacent road.

"The folded planar structure provides activity space," added PPAS. "In particular, the courtyard enclosed by the central veranda and the sightseeing pavilions has become a rest stop for visitors and a centre for tourist activity."

"The landscape mound on the south side of the veranda isolates the park from the noise and sight of the freeway," it continued. "The freeway-facing side of the park, together with the veranda, forms an extended earthscape."

The project is the first of a number of new additions planned for the park. The next step will be to expand the Veranda to the west and south, with a new pedestrian bridge linking it to projects on the opposite side of the road.

Photography is by Shen.