Six buildings have been shortlisted for architecture's most unwanted award – the Carbuncle Cup 2016 for the UK's worst new building (+ slideshow).

The Broadgate redevelopment by Make in London and an extension to a Methodist church by Intelligent Design Centre are among the projects on the shortlist, which was unveiled this week by Carbuncle Cup organiser and architecture website BD.

One unlucky winner will be named as the UK's worst new building of the year next week.

Make's 5 Broadgate office building is the most high-profile project on the list, having involved the controversial demolition of part of the 1980s Postmodern Broadgate development by Arup Associates and Peter Foggo.

The demolition was described as a "great tragedy" by one of the nominators, while the new building was compared to "a flak tower that gives nothing back to the city".

Another London building on the list is the Lincoln Plaza housing tower by BUJ Architects, which was described by one nominator as "an open invitation to commit suicide" thanks to its irregular stacked-box form and jutting rectangular balconies.

The Saffron Square development in Croydon by architect Rolfe Judd, which features a housing tower clad in multicoloured panels, also came under fire for its "car crash of a facade".

"Croydon may be laying claim to being south London's Silicon Valley but if it keeps on producing buildings like this the grass may well be greener elsewhere," said the citation.

Twelve Architects' engineering faculty building for Sheffield University, known as The Diamond thanks to its diamond-patterned facade, was described as "committing sins on both the outside and inside".

An extension to Poole Methodist Church by Intelligent Design Centre also made the list, despite its relatively small size. 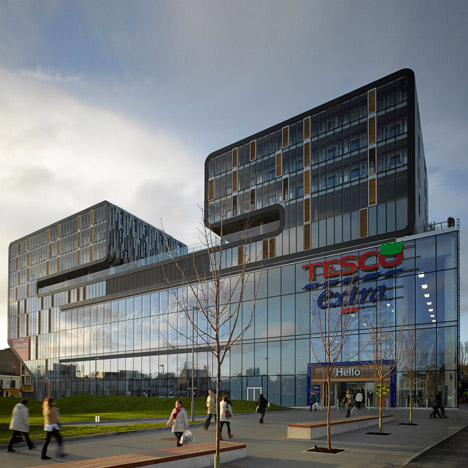 "The building screams of the same bland, belligerent mediocrity that is the insidious moniker of ostensibly polite and ubiquitous background architecture everywhere," said the Carbuncle Cup citation.

RHWL Architects' One Smithfield in Stoke on Trent, which will be the local council's new offices, rounds off the shortlist.

"Regeneration has been long been hijacked as a vehicle for poor architecture and this is a classic example," said the Carbuncle Cup judges.

"An aesthetic mutation between the nostalgic 1980s brain games of Connect 4 and Blockbusters might not seem like a natural breeding ground for architectural malevolence but this building proves what happens when colour goes rogue," they added.

Awarded annually by BD and based on public nominations, the Carbuncle Cup has become one of Europe's most controversial architecture prizes thanks to its focus on naming and shaming the architects behind "bad" buildings rather than awarding "good" ones.

It is intended as a counterbalance to the Stirling Prize, which is awarded by the Royal Institute of British Architects each year to recognise an outstanding new building.

Last year's Carbuncle Cup was won by Rafael Viñoly's Walkie Talkie skyscraper in London, which was described as "a gratuitous glass gargoyle graffitied onto the skyline of London".

This year's shortlist was selected from the public nominations by a judging panel that included BD editor Thomas Lane, architect and BD architectural critic Ike Ijeh and architect Ben Flatman, who is a BD columnist.

Julian Robinson, director of estates for the London School of Economics and commissioner of the Stirling Prize-shortlisted Saw Swee Hock Student Centre by O'Donnel & Tuomey, was also among the judges.

"This year's six finalists may present a variety of different buildings in all shapes and sizes but they are all united by the same old characteristics with which we all now all too familiar," said Ijeh.

Other past winners have included "prison-like" student housing in London and Grimshaw's glass and steel case for the historic Cutty Sark tea clipper.