The programme of events will take place across four areas at designjunction's new location in London's King's Cross.

From 22 to 25 September, Granary Square will be populated with eight giant monopoly-style houses that will host conceptual installations and live activity by design brands, as well as daily design clinics.

The Crossing, an exhibition space stretching from the Granary Building to the entrance of Central Saint Martins university, will feature a series of immersive installations.

British brand Tala will use its new LED lights to create a 12-metre-high rainforest-like structure, while Native Union will showcase its latest technology products. 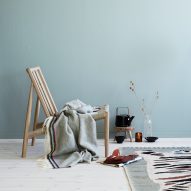 The 10 top installations and exhibitions at London Design Festival 2016

A two-storey temporary structure named Cubitt House will host more than 100 international furniture and lighting brands during the festival, as well as a secret garden.

Satellite Architects designed the entrance to the pavilion, which will comprise a gridded structure filled with mirrors and vegetation.

The Canopy is a temporary shopping venue offering a range of products including fashion, accessories, technology, textiles and stationery.

Hundreds of products will also launch during the event, including a backless bench by Barber & Osgerby and Isokon Plus, and a new silverware collection by Christopher Jenner and Elkington & Co.

A selection of designers including Tom Dixon, Kenneth Grange and Ross Lovegrove will recreate the Caspar stool by Modus to raise money for Movement on the Ground – a charity which responds to humanitarian crises across the world.

Ten dyslexic designers from the worlds of illustration, homeware and fashion will also present work at this year's exhibition, while the King's Cross Creative Quarter, will be a place to celebrate design, food, culture and creative businesses.

On 21 September, Designjunction and Dezeen will present an open-air design party, including pop-up bars and live DJ sets, which will take place from 8 till 10.30pm.

Designjunction will take place from 22 to 25 September 2016 during the London Design Festival. Tickets for the event can be purchased online in advance for £12, while trade tickets are free when reserved in advance.

Dezeen readers can receive a 50 per cent discount for tickets by visiting the designjunction website and registering use the code DEZEEN.

Read on for more information from the event organisers:

The sixth edition of the critically-acclaimed designjunction returns during the London Design Festival, this time taking over an exciting new location, King's Cross.

As always, designjunction will showcase the latest in cutting-edge interior design from world-class international brands and boutique pop-up shops. The show will be presented across four areas against the industrial backdrop of King's Cross.

Granary Square will be populated with eight giant monopoly-style houses, playing host to conceptual installations, high calibre creative projects and live activity from a selection of leading design brands. Look out for a water-inspired installation from luxury bathroom and spa brand Dornbracht, alongside daily design clinics.

Cubitt House: The Trade Destination will present more than 100 of the world's most renowned furniture and accessories brands. Cubitt House will also play home to lightjunction, an area dedicated to high-end decorative lighting brands. One of the most exciting features will be the entrance, with a 70-metre-long by seven-metre-high super structure facade designed by Satellite Architects, featuring more than 4,000 individual Grid cubes.

The Canopy: The Shopping Destination a temporary pop-up venue for 70 retail brands, will sell everything from fashion and accessories to technology, textiles and stationery. Situated beneath a stunning wrought iron structure, The Canopy boasts designjunction's signature raw aesthetic. Expect to find a selection of boutique brands, independent designers and online retail stores. Key shops include Cherchbi, Void Watches, Future and Found, Tom Pigeon, Dyke and Dean, One We Made Earlier and Another Studio.

The Crossing, running through the centre of Central Saint Martins, will house immersive installations including a striking reception area and exhibition space created from Dinesen flooring. Young British brand, Tala will present their new LED bulbs in a 12-metre-high rainforest styled installation, whilst Native Union will showcase their latest technology products. Other exhibitors in the crossing include Kirkby Design, Blackbody and Transport for London.

From 8 till 10.30pm on Wednesday 21 September, designjunction and Dezeen join forces to present the world's biggest, open air design party. Expect live DJ sets throughout the night from familiar faces including Alexis Taylor, from Hot Chip,  alongside several pop-up bars, and street food from The Real Food Festival.

Who's Casper? asks a selection of high profile creatives – including Tom Dixon, Kenneth Grange and Ross Lovegrove – to anonymously customise a Casper stool, designed by Michael Sodeau and manufactured by Modus. Match the designer to the stool using #WhosCasper, and bid on your favourite. All proceeds go to Movement on the Ground – a charity which responds to humanitarian crises across the world.

By keeping each design anonymous, Who's Casper? aims to challenge the emphasis put upon name, reaffirming the significance of personhood and individuality regardless of colour, religion, race, nationality, gender, ethnicity or status.

Designjunction plays host to Dyslexic Design – an exhibition which celebrates the connection between dyslexia and the creative industries. The project, in support of the British Dyslexia Association, will showcase more than 10 dyslexic designers' work over five days during the London Design Festival. The house on Granary Square will be transformed into a spectacular micro-exhibition by celebrated interior designer Ab Rogers.

Hidden at the back of Cubitt House will be a secret garden. The space will be furnished with Deadgood's brand new Naked collection by Magnus Long and Gala Wright alongside a vast array of stunning flowers and plants provided by Bloomon.

Designjunction has launched the King's Cross Creative Quarter, a celebration of design, food, culture and creative businesses. Look out for special offers at some of your favourite local places including room deals at St Pancras Renaissance Hotel, 10 per cent off an ice cream and Ruby Violet, free interior design advice from Houzz and exclusive discounts at select local restaurants in the area.