US firm Leddy Maytum Stacy Architects has completed an academic facility on the Berkeley campus in California that is topped with an expansive, overhanging canopy made up of solar cells (+ slideshow).

The Jacobs Institute for Design Innovation – commonly known as Jacobs Hall – is part of the engineering school at the University of California, Berkeley. The institute's mission is to facilitate new developments in design and manufacturing.

The three-storey facility is located on the northern edge of campus, on a sloped site that was formerly occupied by a volleyball court. It sits adjacent to Soda Hall, a large academic building with a stepped facade that was designed by Edward Larrabee Barnes and Anshen & Allen in the 1990s.

A patio and bridge separate the two buildings, "allowing work to spill outdoors in good weather", the firm said.

On the north, the new centre looks towards apartment buildings and single-family homes. In response to the residential context, the north elevation only rises two storeys. 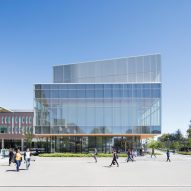 Clad in glass and metal, the rectilinear building is topped with a gently angled, overhanging roof that is covered with a 74-kilowatt photovoltaic array. The solar-cell panels provide enough power to meet 58 per cent of the building's energy needs.

Inside the facility, the architects used an unconventional approach for the layout.

"Typically, university engineering buildings feature fully enclosed classrooms along double-loaded corridors, with shops on another floor or down the hall," the firm explained.

In contrast, Jacobs Hall features large design studios that are bordered by offices and labs. The studios are filled with daylight and can be easily reconfigured thanks to movable furnishings.

"A lofty, open studio at the third level doubles as a design studio and a new venue for university-wide conferences and poster sessions on topics related to design innovation," the firm added.

To help communicate the building's function as a design hub, the team hung graphic wall panels in the lobbies and stairwells.

The pixelated design – which was cut into plywood panels using computer numerical controlled (CNC) machining – was the result of a student design competition. "The winner's scheme was inspired by photos of hand gestures that her fellow students made while talking about design," the firm said.

Sustainability was a guiding factor during the design process. Eco-friendly elements include a high-performance building envelope, natural ventilation, extensive daylighting and an onsite system for bio-filtering stormwater.

"Ultra-efficient fixtures and irrigation reduce water use by 45 per cent below baseline," the firm added.

The facility is designed to use 90 per cent less energy than a typical university building in the region.

Other academic projects in the US include an Ennead-designed law school in downtown Phoenix clad in glass and sandstone and a medical centre on Columbia University's campus in Manhattan by Diller Scofidio + Renfro (DS+R). On the Berkeley campus, DS+R also recently completed an art museum and film centre.