These images by French photographer Virgile Simon Bertrand show a concrete stadium in Cambodia, which was designed by architect Vann Molyvann for a Southeast Asian Games that never took place (+ slideshow).

The National Olympic Stadium is one of the most famous projects by Molyvann – arguably Cambodia's most prolific modernist architect – but it was actually never intended to host the Olympic Games.

It was commissioned for the 1963 Southeast Asian Peninsular Games, which ended up being awarded to Indonesia instead. The stadium was built regardless and opened in 1964, having taken just two years to design and build.

The stadium is located in the capital Phnom Penh, which is currently undergoing a series of redevelopments that has seen both Molyvann's National Theatre and the Council of Ministers demolished.

Last year, French photographer Virgile Simon Bertrand took a detour on an assignment in Cambodia in order to document the stadium, amid fears that its future might also be threatened.

"My first impression is that the Olympic stadium – perhaps his most interesting project – appeared to be under threat with residential blocks being built on its northern side and numerous alarming blogs and articles foretelling its likely destruction," Bertrand told Dezeen. 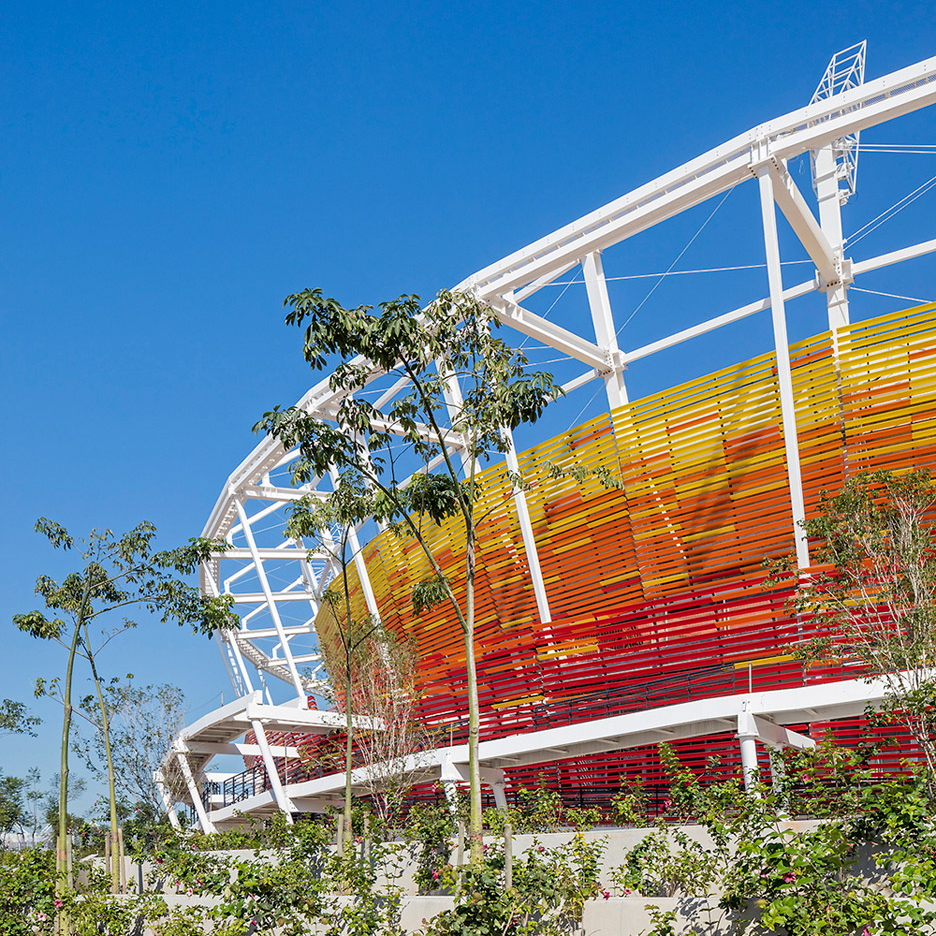 "Phnomh Penh is going through a phase of intense development. I felt on that day that it was important to return and make time to document the stadium before it was to be demolished or disfigured," he explained.

The complex is made up of an outdoor stadium that seats 50,000, with a swimming and diving arena on the eastern side and a indoor arena that seats 8,000 on the western side.

Three staircases lead up to the entrance to the indoor stadium, which features concrete roofs decorated with golden edging and spires on top.

Vertical sheets of angled metal wrap the exterior of the stadium, leaving thin gaps for ventilation and strips of light inside. There are also smaller perforations in the facade, located beneath the tiered seating.

"Simple, economical and yet elegant solutions that to this day remain appropriate," described the photographer. "The vents under the seating area of the gymnasium provide natural ventilation from the three sides – daylight and heat remains at a fairly low level with the use of vertical interlocked angled sheets of metal that do not hinder ventilation."

"The oddity perhaps is the addition of Khmer decorative elements that should be seen in the context of post-colonial Cambodia under Norodom Sihanouk's leadership," he continued.

Although the stadium is no longer threatened with demolition, some aspects have been recently altered. For example, a network of pools designed to prevent flooding during monsoon season have now been filled in.

Molyvann returned to Cambodia and was appointed by King Sihanouk as State Architect and Head of Public Works in 1957, after the country was awarded independence from France.

During the reign of King Sihanouk from 1954 to 1971, Molyvann completed a series of landmarks in Phnom Penh. These include the Independence Monument, Chaktomuk Conference Hall, White Building and Teacher Training College.

The period is now referred to as Cambodia's Golden Age.