Architect Lucy Tauber has transformed a derelict post office in north London into an artisanal bakery with its kitchen on show.

London-based Tauber used bespoke industrial elements such as steel and ribbed glass to convert the space in East Finchley into the Margot Bakery.

Her intention was to keep the interior relatively bare, in order to focus the customers' attention on the food for sale.

The back rooms, which were originally cut off from the rest of the space, are now opened up, revealing the bakers at work and allowing more light into the interior.

"I wanted to create a gentle transition between the customer area and kitchen so you felt, as a customer, that you were part of the productive, almost factory-like environment and not in a dressed parlour that was separate from it," Tauber told Dezeen.

"Bringing through the white walls, counters and industrial palette of blockwork, ribbed glass and stainless steel created that sense of continuity." 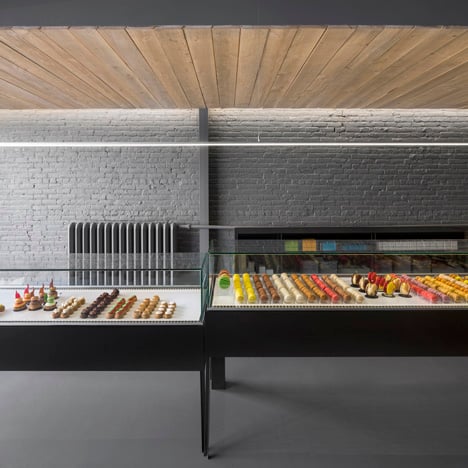 Reclaimed teak boards provide a rustic display counter for the breads and pastries, while steel-framed shelving is installed in front of the kitchen.

The black, silicone pendant lamps that hang above the counter are designed by Danish design brand Muuto and were chosen by Tauber as a reference to the silicone moulds often used in baking.

An injection of colour comes from the cement tiled floor, which reminded Tauber of those found in 1920s Parisian patisseries.

Large windows along the front of the bakery allow light to flood inside, and also allows encourages passers-by to venture in.

"I think the greatest success is the sense of light and openness of the interior, particularly given how dark and enclosed it had once felt," said Tauber.

Tiles are a popular choice for surfaces in bakeries and patisseries the world over.Light grey tiles with dark grouting cover islands in a renovated bakery in Kiryu, Japan, while bespoke aluminium tiles were selected for the walls and floors of a cheese tart store in the Japanese city Sendai.