London Design Festival 2016: Taking inspiration from the passage of time, London design studio Glithero has created a kinetic installation that extends across six floors at the V&A museum.

The Green Room installation is an "abstract clock" made up of a series of neon-coloured silicone cords, each joined to a motorised revolving arm at the top of the stairwell.

As the arm turns, the strings rise and fall one by one, creating a wave-like motion.

"Our studio is known for making installations, products and furniture that focus on the process," Glithero co-founder Tim Simpson told Dezeen. "And for that reason we are often consumed with the idea of time in our work." 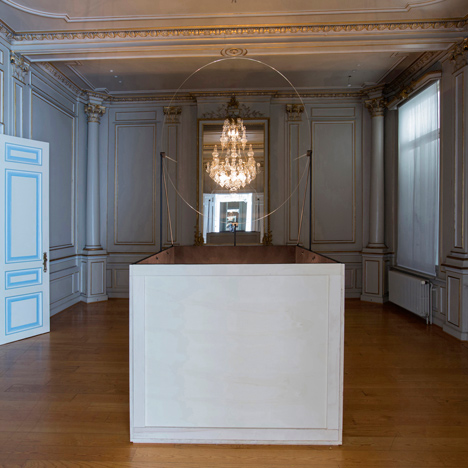 "We wanted to make something that was effectively an abstract clock, and has an arm that turns very high up in the ceiling that turns one revolution per minute."

The installation is located inside a historic stairwell, which features moss green walls and large, round windows that let in shafts of natural light.

"The piece is called the Green Room because the space is predominantly green," said Simpson. "It's a part of the museum that they've not yet used for these types of intervention."

"It also refers to a term that surfers use for the moment that they're in the barrel of a wave, which is what the experience is really about."

Visitors can climb the six levels of stairs to see a different view of the vertiginous installation, which was created in partnership with Italian watch brand Panerai.

Simpson founded Glithero with Dutch designer Sarah van Gameren. The pair have previously created an installation using antique objects from a Belgian museum's permanent collection, and used strips of seaweed to pattern a series of vases.

The Green Room is installed inside the V&A as part of the London Design Festival, which takes place from 17 to 25 September 2016.

Other installations across the capital include plant-filled pavilions by Asif Khan and a giant smile made from cross-laminated tulipwood by Alison Brooks.