The four firms were shortlisted to design a new home for the Italian soft drinks company San Pellegrino in July 2016. But their proposals have just been revealed, ahead of a winner being announced later this month.

The brief was to redesign the factory bottling plant, which has been located in San Pellegrino Terme since 1899.

The design by Bjarke Ingels' firm BIG features a series of huge arched openings that frame the Alpine landscape.

"Like an aquatic equivalent of a wine cellar, the repeating archways expand and contract to create the narrative framework for the purity and clarity of the mineral water, in an environment characterised by lightness, openness and transparency," said Ingels.

Dutch studio MVRDV has developed a building with star-shaped floors, transparent walls and a roof covered in a thin layer of water.

"We turn the factory even more into a star. We dream about a factory that enlarges its transparency, its honesty, its relation with the landscape," said MVRDV. "A new transparent star floats over the factory and the valley." 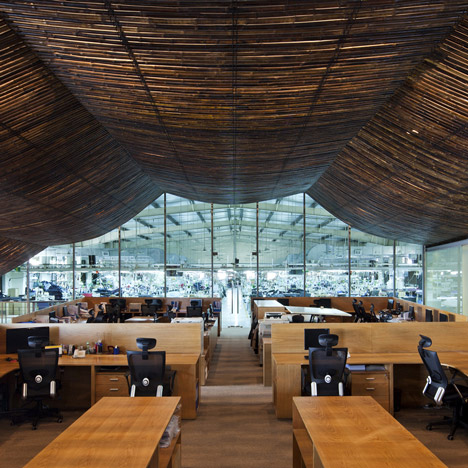 Oslo- and New York-based firm Snøhetta proposes a building wrapped in stainless steel mesh in a bid to integrate the new factory physically and visually in its environment.

A jury from San Pellegrino's parent company Nestlé will select the winning design. The winner is expected to be announced in late September 2016.