Dezeen promotion: this film by Eizo ColorEdge follows visualisation artist Forbes Massie as he describes his studio's methods for creating images that "your grandmother falls in love with" (+ movie).

Forbes Massie's film is one of a three-part series called Living, Breathing Colour, which features image makers from different creative disciplines who use Eizo's ColorEdge colour-correcting monitors and display systems.

In the video, Massie – founder and director of the Forbes Massie architectural visualisation studio – discusses his team's work, which often features a desaturated palette to create a painterly effect.

One of the most important features of his images, he says, is that everyone – not just architects –can understand and appreciate them.

"If there's a rule for the images that we're trying to make, it's they shouldn't just appeal to architects, they should be images that, when framed, your grandmother falls in love with and wants to hang on her wall," he says.

To achieve this, Massie's team try to make images with atmosphere, rather than simply creating photorealism.

"The purpose of our image making is not to recreate a photograph," he adds. "We have an opportunity to play with light, to play with atmosphere that potentially makes that image more engaging."

During the video, London-based Massie – who counts Thomas Heatherwick, David Chipperfield and Haptic among his clients – visits a Gerhard Richter painting at Tate Modern to show how the artist has influenced his work.

Massie suggests that, in the future, there will be museums dedicated to digital images – something he has already experimented with for his recent Seduction of Light exhibition in east London.

"We are recording the architecture of our time," he says. "We want to celebrate those images by framing them and putting on the wall so, in years to come, could you have a museum where there are digital paintings that people want to come and visit?" 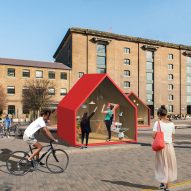 Giant monopoly houses and rainforest installation to feature at designjunction 2016

Eizo shot the film in an"ethereal" style as a reference to the studio's artwork. The aim was to complement Massie's use of light, colour and materiality.

Massie's film is the second in a series, following another that focuses on Munich-based fashion and fine art photographer Elizaveta Porodina.

The final video will feature Oscar-winning visual effects studio Framestore, which have worked on a series of well-known films like Gravity, The Legend of Tarzan and The Avengers.

Massie launched his studio in 2003, after originally studying product design. He now leads a team of 15 artists.

Eizo ColorEdge will be exhibiting in one of the giant monopoly-style houses at designjunction from Wednesday 21 September to Sunday 25 September 2016, during London Design Festival.

Eizo is also the sponsor for the Dezeen and designjunction's open-air design party on Wednesday 21 September 2016 from 8 till 10.30pm, which includes pop-up bars and live DJ sets.