The Wood collection expands on the Belgian design duo's previous work for Bisazza, which has included tiles decorated with imagery based on Britain's Industrial Revolution.

The oak parquet comes in a range of colours and patterns that Studio Job describes as "approachable" compared to some of its back catalogue.

"It's quite cool that Bisazza, a mosaic brand, has come up with a mosaic wood collection," the studio's co-founder Job Smeets told Dezeen. "And it's quite approachable too."

"It looks like something you actually could have in your house."

The collection's Gingham pattern is a multicoloured chequerboard that Studio Job's other co-founder, Nynke Tynagel described as "like classic tiling or a tablecloth with a gingham pattern".

The difference is that the squares can be ordered laser engraved with imagery of animal skeletons from the Studio Job library.

"Adding them to the floor, they become like fossils," added Tynagel. The motifs have previously featured in the studio's tiles, wallpaper and furniture.

The other parquet designs use different-shaped wood elements to create trompe-l'oeil illusions. Bloc and Escalier feature parallelograms arranged to create the impression of three-dimensional cubes popping out from the floor – a reference to vintage ceramic tiling. 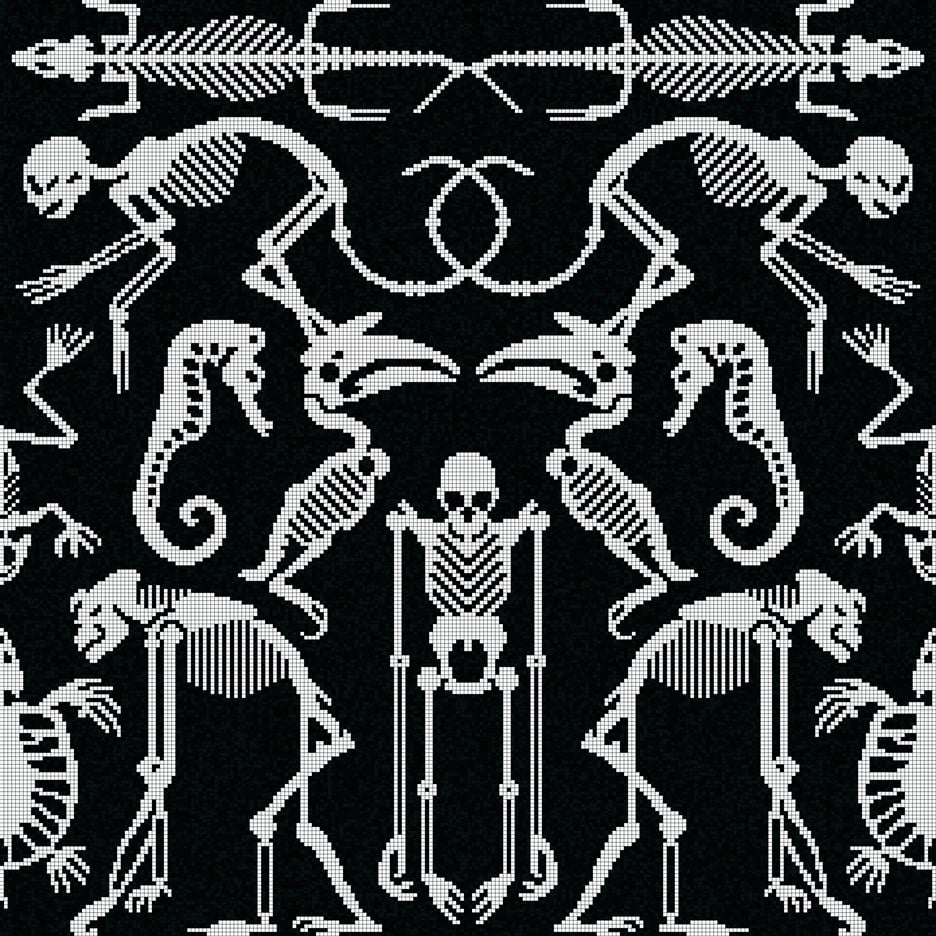 Cannage is a wicker-like pattern that appears to interlace, while Plissage and Zig Zag are more linear. All six designs are composed from four different shapes, a challenge that Studio Job embraced.

"With mosaics you're limited to working with squares, and this time we worked with four shapes, and the fact that we could use colour is interesting and new for wooden flooring," said Tynagel.

"It was challenging," added Smeets. "We love a challenge, especially Nynke, because she's a master at doing puzzles."

"It was like we were given four puzzle pieces and had to make all these different effects."

The parquet pieces come in ten different colours that can be mix and matched, ranging from natural timber shades to Denim blue and Mint green.

Tynagel and Smeets, former students of Design Academy Eindhoven, founded Studio Job in 2000. Based in Antwerp and the Netherlands, their studio has grown to around 30 employees.

The studio often works with wood and marquetry, making its latest project for Bisazza a natural fit. Previous creations include Indian rose wood cabinets inlaid with maple silhouettes of animals, insects and birds alongside weapons, industrial buildings and skeletons.

A former couple, Tynagel and Smeets once crafted a coffee table that symbolised their break-up as a head-on collision between two steam trains.

They previewed the Wood collection at the London Design Festival, which runs until 25 September 2016. The duo is also launching a second product at the festival – a black and gold graphic wallpaper designed with NLXL Lab.