Binet photographed Port House ahead of its inauguration last week. The building is one of a string of projects designed by the late architect Zaha Hadid that are due to be completed this year.

Hadid's firm converted a former fire station in Antwerp's docks to create the headquarters, and added a glazed extension to its roof.

The volume is covered in triangular facets that are angled to give it a rippling texture at one end and a smooth surface at the other. 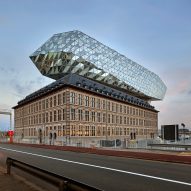 This smooth end is pointed like the bow of a boat and projects over the edge of the original heritage-listed building below, where it is supported by an angular concrete leg.

An integrated viewing platform is wedged between the old and new parts of the building.

Port House is designed to host 500 port authority staff in open-plan offices who were previously working across separate sites in the Belgian city.

Hadid, who died earlier this year, first unveiled plans for the project in 2009.

It is one of the most ambitious designs proposed by the British-Iraqi architect, whose firm hopes to realise over 30 projects that were in the pipeline at the time of her death.

They include a new airport terminal building in Beijing and a contentious stadium for the 2022 FIFA World Cup in Qatar.

Binet has been the go-to photographer for high-profile architects including Zaha Hadid Architects, Peter Zumthor, Daniel Libeskind and Caruso St John for decades.

She started working with Hadid in the infancy of the architect's career, shooting her first major project, the Vitra Fire Station, in the early 1990s.

"Her buildings have changed a lot because the materiality has changed and technology has changed so much, and she is really playing with the technology," Binet told Dezeen during an interview last year.

Binet shoots exclusively in film. In an exclusive interview with Dezeen last year, she spoke to Dezeen about her dedication to the analogue medium and the problems she perceives with digital photography.