"Co-working is not just for freelancers and startups," the white paper finds. "More and more corporations have already started to realise that co-working offers great potential for fostering innovation."

Shared offices have the potential to "fundamentally change knowledge work and catalyse innovation in the future," it adds.

They could also help the wellbeing of employees of big companies, the report suggests.

"Co-working spaces provide a productive, creative, and satisfying work atmosphere, not just for freelancers, but also for corporate organisations," according to the document.

Called Harnessing the Potential of Co-working, the report is one of a series of white papers produced by Haworth exploring workplace culture and design.

It investigates the growing trend for co-working and suggests how the spaces could be used by large employers in future.

The report finds that large companies could benefit both from placing staff in off-site shared spaces where they can mix with workers from other companies, and by inviting companies to make use of co-working studios within their offices.

Co-working spaces tend to be more sociable and less hierarchical than corporate workspaces, which helps encourage workers to think for themselves.

"If you enter these co-working spaces, they're just so vibrant and different," added Stefan Rief, one of the authors of the report.

"We have been thinking about how corporates could use these models," he added. "Are there co-working models for normal employees like me? How could employers profit from these spaces?"

Rief is a workspace innovation researcher German research organisation Fraunhofer IAO. He was invited to collaborate with Haworth on the report after co-writing a groundbreaking 2014 book on the co-working phenomenon.

The book, called The Fascination of Co-working – Potentials for Companies and their Employees, investigated the rise of shared workspaces and explored their benefits.

One of the chapters looked at how these less hierarchical, more community-based spaces could benefit large companies – leading Haworth to invite him to help produce a white paper on the topic.

What is a co-working space?

The report starts off by exploring how the co-working phenomenon came about, and defines what makes a co-working space different from a conventional workplace.

Co-working offices typically have an emphasis on community; feature a collection of like-minded people with similar interests and values; and offer spaces for both work and events as well as shared facilities such as printers and kitchens.

They offer a more flexible and sociable way of working that suits younger workers who have a different attitude to work.

"A fundamentally new interpretation of work has developed among the highly educated and younger generations," the report states. "These workers seek work that is pleasurable and that makes sense."

This can lead to healthier, happier workers than those in more formal work environments, with their strong hierarchies and corporate monocultures.

"Since social cohesion and social interaction are naturally intrinsic rewards for people, the existence of a community can raise the general wellbeing of workers," the report says.

Co-working is already catching on among large companies, the report finds.

"In 2012, six per cent of all coworkers were employees of large companies [of more than 100 workers]," it states.

"It is no longer rare that companies are engaged in co-working, taking advantage of co-working interfaces between the corporate world and the evolved forms of free work."

How co-working has grown

The term "co-working" was coined in the 1990s by American author Bernard DeKoven.

"Co-working evolved when the home office proved to be an insufficient space for freelancers seeking collaboration with like-minded, independent people," the report says.

Since then there has been an unstoppable rise in co-working. In 2012 there were with an estimated 200,000 people using co-working spaces set up by independent providers and chains such as WeWork and Industrious. Some sources claim that numbers of coworkers are doubling each year.

More recently, the co-working ethos has exploded, with laptop-wielding workers spilling out of dedicated spaces to colonise cafes, hotel lobbies and even remote Himalayan valleys.

The key business benefit to co-working is the fact that interacting with people from other companies generates new ideas, Nagy believes.

"Innovation happens at the boundaries," he said. "So when you mingle people together, all of a sudden they start to talk to one another, they develop social relationships, friendships and innovation happens faster and better things come out."

The future of corporate co-working

The first is the notion of "co-working as a sabbatical," where work and leisure become entwined and employees view time spent in shared spaces away from their main place of work as akin to a holiday.

"Such a model can be well suited for project work that calls for a high level of creativity," the report says. "If the space combines co-working with specific leisure activities, the co-working effect can be intensified."

A second potential use of co-working spaces is as an alternative form of professional training.

"Co-working can offer high potential for training, and its positive effects still are largely underestimated," the report says. "Employees can spend a period of time in a co-working space with professionals from similar fields."

This approach could also prove cheaper than in-house training and provides employees with a "welcome change" from their daily routines. 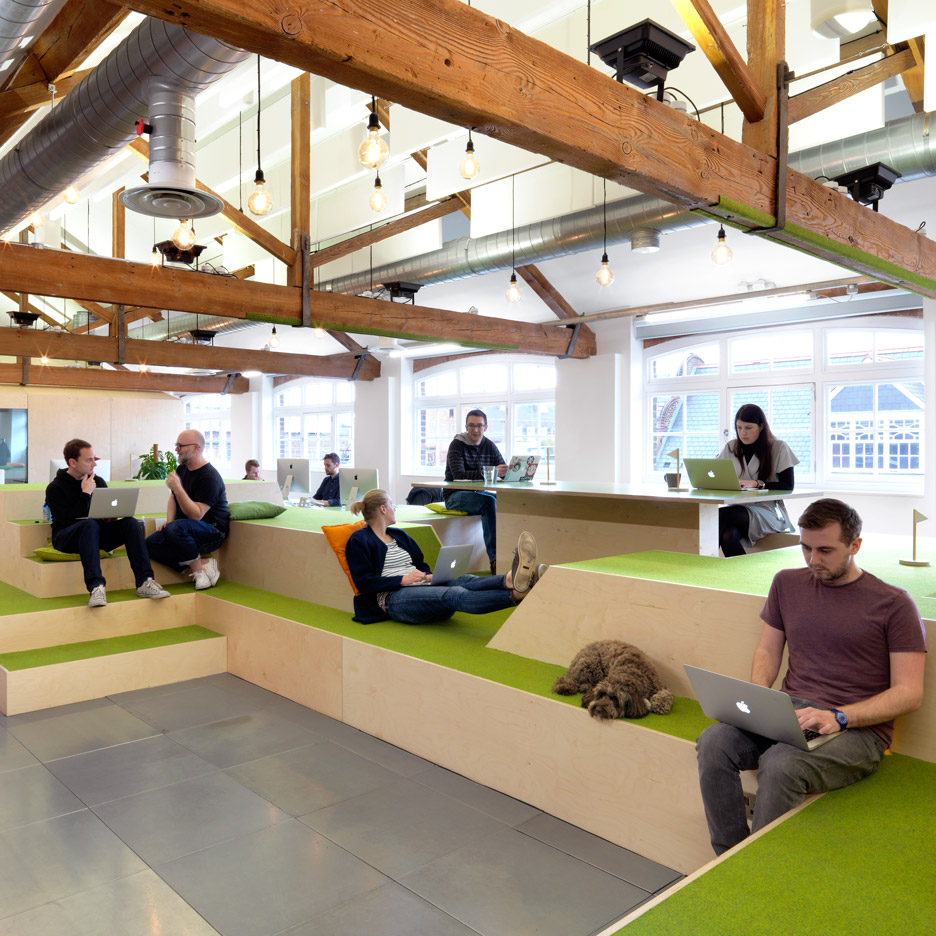 "In this model, different companies operate a co-working space jointly and make it available to their employees in order to conduct joint developments or projects that require constant collaboration," the report says, in what it describes as an "association of enterprises" approach.

"This type of arrangement could move beyond the initial goals due to the community of trust, yielding information exchange, future collaborative projects, and strengthened partnerships."

"The more innovative the company wants to get, the more the qualities of co-working apply," the report says. "By using co-working spaces as institutionalised contact centres, companies can cooperate with start-ups to bring specific levels of creativity to the innovation process via freelance experts."

This is part of in a series of articles produced by Dezeen in collaboration with Haworth exploring the brand's white paper reports into workplace design. Download the Harnessing the Potential of Co-working report here.

Illustrations are by Stephen Cheetham.