Black and white surfaces, indoor trees and a rooftop workspace all feature at the new head office for website building service Squarespace in New York.

Squarespace wanted to house its four different offices in one place so took over 98,000 square feet (9,105 square metres) within a 1920s building in Lower Manhattan.

"Not only did we want to come together into a single space, but we also wanted to create more diverse spaces for working and collaborating," said Anthony Casalena, Squarespace founder and CEO.

His brief to the designers was to "create a space imbued with texture, richness and warmth". 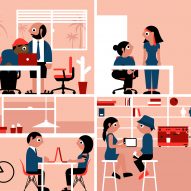 A+I's team spent three months with the tech company to evaluate needs, which they deduced were a wide variety of working environments ranging from formal to informal – common at many offices for tech companies.

Similar approaches have been taken at other tech company headquarters, including office spaces for Wix, Pinterest and Evernote.

The result at Squarespace is a largely colourless interior, where concrete forms the floors and thin strips of blackened wood cover large portions of the walls and ceilings.

Planting adds splashes of green across the offices, while a dark-coloured walnut wood also helps to add warmth to the otherwise stark material palette.

Entrance is through a black industrial-style door, which leads to a ground-floor event space.

Upstairs, most of the desk areas are open plan, while meeting rooms are screened off by tinted glass partitions.

Employees can also head to the rooftop to work and socialise al fresco on days when the weather is good.

"Our designs purposefully spread out the spaces where people do their work, their thinking, their collaborating and their socialising," said Folger. "This has proven to be very impactful and positive for the work flow."

"The new spaces we've developed have gone a long way in changing the vibe of working here," added Casalena. "It's definitely an impressive space, but it's also inviting and warm."

A+I was founded in 1996 by Folger and Brad Zimor. The studio has since designed headquarters for companies including Horizon Media and Tumblr.