His company described them as "two new routes for unprecedented immersion in the heart of the Starck universe, and a way for the designer to be always closer to his sentimental tribe."

The move marks a turnaround for the 67-year-old designer, who has previously eschewed social media and poured scorn on digital culture.

"This idea of living everything through a 2D screen, it's no life," he said in an interview with Dezeen last year. "I think it's really dangerous." 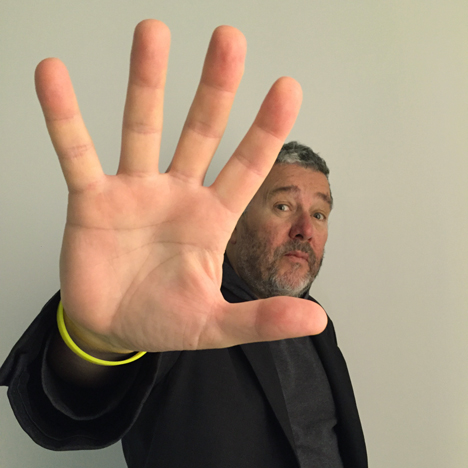 "People now record everything they do," he added, claiming that reliance on digital devices would destroy human memory.

"That means perhaps in two generations we shall have no more than software of memory. Why try to remember?"

"It's sick and the damage will be astonishing," he added. "Nobody will ever see the pictures again. That means it's erased. It's not in the brain, it's perhaps in the cloud but nobody will go to see the cloud."

Starck made his comments in Milan during the furniture fair last year, where he was one of several designers to speak out about the intrusive nature of social media.

Fellow designer Patricia Urquiola said that bloggers and Instagrammers were turning fairs such as Salone del Mobile into "a kind of wild west" while Konstantin Grcic said designers were becoming "cattle that are pushed around."

Starck's company plans to use its new social media accounts to update followers with news, behind-the-scenes imagery and designs from his archive.

Posts on his Instagram account include photos of Starck riding an escalator and pointing at one of his own quotations.

The Frenchman is one of the most prolific living designers, and is best known for products including the Juicy Salif lemon squeezer and the Louis Ghost chair.

Although he is best known for designing interiors, furniture and products, he has also completed a series of architectural projects, including a collection of prefabricated, low-energy homes and a cultural centre in Bilbao.

He's also the latest designer to venture into the fragrance industry, with a trio of eau de toilettes released under his new perfume label, Starck Paris.