Milan 2015: there was something in the air in Milan this year. Furniture brands were launching fragrances while numerous independent designers were experimenting with scents (+ slideshow).

From the botanical gardens in Brera to the industrial warehouses of Lambrate, designers presenting across the city were showcasing projects relating to smell. This reflected a wider trend that has been emerging for the past year, which has seen both large brands and new graduates make the move into the world of perfume.

One example from Milan was The Garden of Wonders, organised by creative thinktank Be Open, which featured eight designers' interpretations of defunct perfume brands housed within identical gold-coloured capsules. The exhibition took place in the serene botanical gardens in Brera and included contributions from Nendo, the Campana brothers, Tord Boontje, Jaime Hayón and Front.

"Perfumes [at the exhibition] create spaces, experiences and even epochs, while design demonstrates how much it can contribute to our perception and interpretation of perfumes," Be Open founder Yelena Baturina told Dezeen. 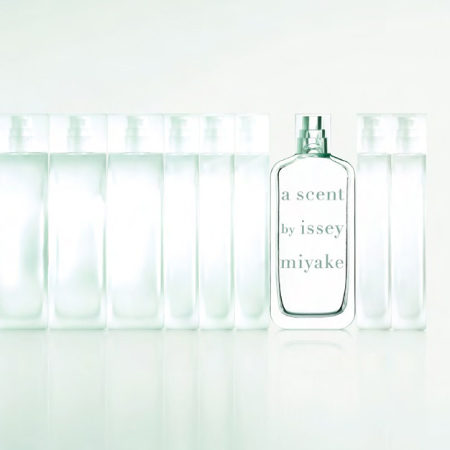 A Scent bottle by Arik Levy for Issey Miyake

Students from forward-thinking design schools including Design Academy Eindhoven and Lund University were among those showing more experimental concepts and contraptions relating to smell.

Eindhoven graduate Mickaël Wiesengrün worked with Norwegian scent designer Sissel Tolaas to create a giant apparatus that mixed scents associated with a specific location's past to recreate how it might have smelt. First shown at the institution's graduate show last year, the installation was brought to the academy's Eat Shit exhibition in the Ventura Lambrate design district and Wiesengrün created a bespoke scent for the building where it took place.

"I started at Design Academy, where the whole of the building is an old factory so there the smells were sweat, grease and metal," Wiesengrün told Dezeen. "This place (Eat Shit) used to be a warehouse for wine and hardware and orangeade components so the smells here are a wet basement, oranges and alcohol."

Across the road from Eat Shit, Britt Jönsson of Lund University presented a collection of handcrafted natural perfumes made by steam-distilling locally grown flowers and plants in a micro-laboratory. Her goal was to highlight the amount of toxins we put on our skin through synthetic fragrances and beauty products.

"Perfume is a product that used to be very expensive and exclusive and that today has become a blend of chemicals," Jönsson said. "I asked myself how did we get from the handcrafted perfume to the poison and mass-produced scents that are everywhere."

A host of other students and graduates from Eindhoven, the Royal College of Art and École Boulle presented fragrance-themed projects at their school exhibitions over the past year.

Royal College of Art alumni Sasa Stucin and Nicholas Gardner designed an oval mirror that emits a scented vapour cloud, partly obscuring the reflection as it perfumes the air.

Eindhoven's Alexandra Stück infused a range of textiles with different remedial herbal scents to make the wearer feel calm, focused or even aroused.

École Boulle student Charline Ronzon-Jaricot created a device that releases a bespoke scent during a moment users would like to remember, as well as a "scent vase" that enables people to detect the different notes of a perfume usually only identifiable to experts.

"Perfume is an art and its creators – perfumiers – are artists," she told Dezeen. "But the image we have of perfumes today is stuck in the luxury and fashion context. We never take the time to contemplate a perfume for its own beauty. Too much importance is given to the packaging and the brand image but not enough to the smell."

Along with the established names including Moooi and Kartell that are launching scented products, emerging designers are also dabbling in the world of perfumery.

For example, Kentaro Yamada has created a fragrance suitable for Neanderthals. Contained within a porcelain bottle shaped to looked like a primitive stone tool, Yamada's eau de toilette contains notes intended to trigger memories of our prehistoric roots locked in our DNA.

"The world of scent is exciting for designers because scent is invisible, but the story that scent can tell is very vivid," Yamada told Dezeen.

Fashion houses and department stores have been in on it too. Dior has produced a funnel-shaped glass fragrance tester to replace the normal slips of card, while Selfridges gave over an large area of its London store to a "laboratory" that helped shoppers find a scent to match their personality.