Both Amanda Levete's MAAT museum and the Lisbon Architecture Triennale opened in the Portuguese capital earlier this month. Together they prove that architecture is physically shaped by its fiscal situation, says Mimi Zeiger in this week's Opinion.

One opening presented a sparkling new kunsthalle with an interdisciplinary curatorial mission, while the other offered an inward-looking meditation on architecture, representation and authorship. Taken together, they represent an ongoing struggle to define architectural value to practitioners and the public alike.

Taken together, they represent an ongoing struggle to define architectural value to practitioners and the public alike

The fourth Lisbon Architecture Triennale is titled The Form of Form, which only by coincidence echoes the doubling of the 2013 edition, Close, Closer. The previous triennale faced criticism for celebrating the more fringe spatial practices. The latest is certainly a swing back towards the discipline of architecture. Conceived by curators André Tavares and Diogo Seixas Lopes – who sadly passed away earlier this year, but whose influence is pervasive – it centres primarily on architecture as architecture, and mines the discipline for a formal relationship to history and urbanism.

The triennale is divided up into four main exhibitions and a series of auxiliary shows. These include the exhibition Building Site, addressing the process of construction; The World in Our Eyes, a survey of representation as seen through urban mapping and research; and Sines: Seaside Logistics, the result of a student competition about the relationship between landscape and infrastructure.

The focus on form is what makes it possible to craft a simultaneous interpretation of these two dovetailed openings, under a slightly revised title: The Form of Affording Form.

Because, let's face it, architecture takes shape in particular fiscal contexts. A return to building cannot be separated from the economics that drive construction. Indeed, Tavares considers the making of architecture a vital kind of knowledge production in a time of economic crisis. "The way to overcome is to build," he says.

In many ways, Levete's scheme for MAAT is symbolic, an expressive architectural form drawn from the language of global computational design. The EDP Foundation – a cultural arm of the gas and electric corporation EDP Group – underwrites the museum. EDP, short for Energias de Portugal, was originally a Portuguese company, but in March 2016 the Chinese state-owned power company China Three Gorges Corporation became its main shareholder.

By placing MAAT on the banks of the Tagus River, its funders suggest that the museum is part of the international conversation on architecture and that Portugal is an active participant in the greater fine art world.

The riverbank location is part of a strategic reinvestment in Lisbon's waterfront, an area not far from the neighbourhood Belém, where tourists diligently line up to buy a famous Pastel de Nata custard tart. MAAT is an anchor institution in the decades-long redevelopment, along with the Cultural Centre of Belém by Vittorio Gregotti and Atelier Risco (1993) and Paulo Mendes da Rocha's Coach Museum (2015). This comparison is not intended as a cynical dismissal of Levete's kunsthalle, but to instead offer an insight into the co-dependency between form and social/political circumstances here.

During a press conference for the MAAT opening, director Pedro Gadanho sketched out the museum in an economic context, noting that Portugal had passed through a crisis with austerity and that the building offered a "positive reminder" of Lisbon's recent renewal as a tourist destination, as well as a home to a growing foreign community. 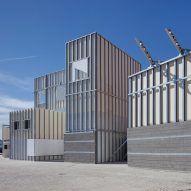 At the same event, António Mexia, EDP Group CEO and EDP Foundation chairman, underscored the altruism of a private investor "giving" public space back to the city – with an area of close to 10,000 square meters, the building's curved roof offers visitors a panoramic view of Lisbon and the waterfront.

This autumn, some of that public space accommodates The Form of Form pavilion, designed by architects Johnston Marklee, Nuno Brandão Costa, and Office Kersten Geers David Van Severen (Office KGDVS). Made out of steel studs and painted drywall, the temporary construct is a mannered study in form over context.

The design process was a game, an exercise in blurred authorship, in which each of the practices chose works from each other and then combined fragments of them into what the curators described as "a universal language of built forms". Those forms – taken from projects such as Johnston Marklee's Vault House, Brandão Costa's Padrão School, and Office KGDVS's Ordos Villa – were then stripped of original brief, site conditions and client demands.

There's an argument here for atmosphere over complexity

The result is a patchwork of spaces that pleasantly fit together. Curated by Socks Studio, the sequence of rooms displays a selection of architectural forms – typological, vernacular and conceptual – and several architecturally minded artworks, by conceptual master Sol LeWitt and Dutch visual artist Tim Enthoven.

Works are presented with limited texts, as if to say that knowledge should come through graphic matches, not textual research. Similarly, the reproduced forms – of Zoroastrian towers in Iran, or Josef Albers album covers – echo in the pavilion design. There's primal architectural pleasure in watching the Mediterranean sun wash over white walls, illuminating apertures, curves and arches. There's an argument here for atmosphere over complexity.

Yet, the overall effort is provisional, a stage set for ideas. While the curators desire a conversation about building, the focus on basic forms – on squares, cylinders, grids, vaults, pyramids and circles – is unduly disciplinary. It becomes nothing more than an academic currency, a return to fundamentals being used to counter recent excesses of parametricism.

And like MAAT, The Form of Form fits within the economic context of austerity. While the last triennale – Close, Closer – took austerity as content, favouring alternative models of practice and tactical actions, the current one defiantly resists any aesthetic of precarity. As if form – autonomous, timeless – transcends such contemporary burdens. As such, the pavilion offers a collage that is semi-programmatic, non-political, and, ultimately, materially ambivalent. This isn't necessarily a bad thing, but it does shackle the work to an interior monologue, rather than a public dialogue.

Like MAAT, The Form of Form fits within the economic context of austerity

Where MAAT, with its interdisciplinary mission and bid for art-world validation, strives for engagement and "integration", in the words of its CEO, the triennale takes a more poetic stance. As with the early days of sampling in the music industry, the more disciplinary knowledge you have going into the material, the greater the meaning.

Walking through The Form of Form exhibition with Mariabruna Fabrizi of Socks Studio, we stopped in front of a drawing of an Indian stepwell. Perfectly square in plan, the image flickered between documentation and abstraction. I wondered aloud about its meaning, a meaning that might extend beyond form. She explained the practical, ecological and social role of the design. Her narrative softened my unease at the embrace of what might seem like solely a graphic logic to the curation. Still, those explanations were reserved for conversation, not wall texts.

I wasn't convinced this was enough to prove the value of architecture as a formal practice. But Fabrizi was less concerned with the present. Looking both to historical precedents and to future ruins, she told me: "Society may change, but in the end, form remains."