London-based Mobile Studio Architects has collaborated with students at a US summer camp to create a series of oversized flip-books that depict fictional forest tales.

Titled Universal Play Machine, the project utilises the traditional flip-book animation technique but on a much larger scale.

Mobile Studio Architects worked with Beam Camp in the forests of New Hampshire to realise the project.

"Essentially an oversized flip-book, the system scales up the split-flap display technology first used in airports and train-stations across the world," said Mobile Studio Architects.

Hidden away in the forests of the camp, the machines encourage the students to explore the surrounding wilderness while also acting as creative stimuli.

The pages of the books are protected within rectangular metal frames and are fitted on rotating mechanisms powered by handles on the side.

"Exaggerating the analogue nature of the technology, the Universal Play Machine has the capacity to rotate through a sequence of images created and powered by campers," said the studio.

"Universal Play Machine is a bespoke and adaptable kinetic sculpture that is also a device for learning – not only in the process of its creation but also in how it can be interacted with when complete."

The devices were constructed through a collaboration between Mobile Studio Architects, craftspeople and all 89 campers. Each installation contains a total of 50 drawings – all of which were devised and created by the students themselves.

The frames were constructed with in-built LED lights, meaning that the flip-books can also be used night.

Mobile Studio Architects isn't the only practice to have dipped its toe into giant flip-book design. Munich-based Brut Deluxe designed Christmas lights in Madrid that it described as a "flip-book on an urban scale". 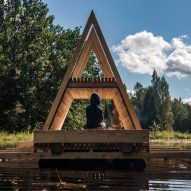