The label based the collection around two of Tanaka's designs, Face and Bokugi, both created in the 1990s.

The image of a face – one which was frequently used by Tanaka – features in several pieces in the collection.

Wedge heels are adorned with bright pink lips, while stylised angular eyes peer out from the tops of shoes and the outside of clutch bags. The face also appears on colour-blocked dresses and tunics.

Bokugi references traditional brush calligraphy and ink painting, and was first created by Tanaka for a poster design.

Details taken from this have been added to a range of linen tunics, jackets and tops, as well as a set of portable lamps that can be folded flat when not in use. 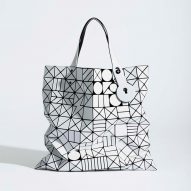 "In selecting the materials, we have contemplated the actual works in earnest and considered how to make their appeal blossom in the form of clothing," said the label.

Issey Miyake launched its first Ikko Tanaka collection in January 2016. It featured motifs including the image of a geisha taken from posters designed for the Asian Performing Arts Institute – one of the designer's best-known works.

The Tanaka Design Studio, founded in 1963, completed work for companies including Mazda and fashion designer Hanae Mori as well as Issey Miyake. The designer met Miyake in the 1960s while both were living in Tokyo, and the two remained friends until Tanaka died in 2002.

"This collection embodies the joy of making things," added the label. "This is something that has been passed down from Ikko Tanaka to Issey Miyake and his team as well as all people engaged in making clothes."

"When that joy connects with the person wearing these clothes, we hope that the real vision of the ideal form of design will manifest itself."

Photography is by    Francis Giacobetti.