RÄS studio removed a series of walls that divided the long and thin La Olga apartment, and blocked natural light. They created a pair of light and airy bedrooms with large windows, and an open-plan living, kitchen and dining area.

The team, who recently renovated another Barcelona apartment in the same style, left the existing brickwork and vaulted ceilings exposed and painted them white.

Dark accents help to break up the space into specific areas. Grey corrugated tiles cover a section of wall beside the kitchen, while the hallway and bathroom to its rear are painted completely black, and have black floor tiles. Mottled grey tiles cover floors throughout the rest of the spaces.

"We covered a piece of a wall with the tiles that were left over from the flooring, but they were pasted on the wall showing their back, creating a powerful vertical grey texture on a white wall," architect Clàudia Raurell told Dezeen.

"We found La Olga with way too many partitions regarding its dimensions and its availability of natural light and ventilation," she continued.

"We worked on contrasts to break the volume up into planes, a gesture that makes the space have some complexity."

The kitchen is fitted with black cabinets that contrast a white central island, and a single black ceiling beam above it marks the position of one of the removed walls.

A sliding corrugated glass door separates the master bedroom and the living area, allowing light to pass between the two spaces while maintaining privacy. 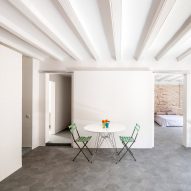 Other recently renovated flats in Barcelona include a light-filled basement conversion and a compact flat with a layout defined by crooked walls.