More than 30 alternative visions for sex toys feature in the For Play exhibition, which questions expectations of what design for sexuality looks like.

Taking place as part of this year's Dutch Design Week, For Play features works by 37 artists and designers.

The exhibition, curated by Sanne Muiser and Tom Loois at the MU gallery, is centred around two themes: physicality and imagination.

The pair tasked artists and designers with creating more playful, vulnerable and original versions of existing tools for sex.

"With imagination we really want to make people play more, be more creative," he said. "Not only regarding sex objects as sex objects, but looking at your household objects too."

Read on for the curators' picks and descriptions of the five best (dildo-free) designs:

Let's Stick Together by Lucas Maassen and Margriet Craens

Artist Margriet Craens and designer Lucas Maassen take furniture as a metaphor for human relationships. Two years ago they started experimenting with this concept in a work titled The Chair Affair. Commissioned by For Play, Let's Stick Together consists of two cabinets tied together by a bondage artist, representing two individuals, each with their own drawers and doors, which have found a new balance of solidarity and interdependence.

When entering an exhibition about sexuality, people carry with them their preconceptions and taboos. Therefore we commissioned Joost Gehem and Tiddo Bakker to come up with an interactive work that functions as a mental washing street so that the visitors can approach the topic of sexuality and design with fresh eyes. Their dynamic installation is inspired by the courtship ritual of exotic birds.

Fort Folly is a giant bed build up out of more than 200 pillows and advocates creativity and playfulness in the bedroom. The space creates a safe haven for naivety, making mistakes and not taking yourself too seriously.

A design academy Eindhoven graduate project created together with the Máxima Medisch Centrum department of gynaecology. This work encourages and empowers women to look at their intimate parts to achieve a better understanding of their own body, facilitate the conversation and tackle the taboo surrounding the vulva. 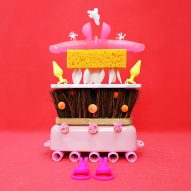