Apart from its cork insole, the whole shoe was produced using a combination of plastic sourced from unused and damaged adult toys and non-bleached Ethylene-Vinyl Acetate (EVA) foam.

Rose in Good Faith founder David Teitelbaum came up with the idea to create a shoe made from sex toys after visiting Doc Johnson, one of the largest sex toy companies in the US.

Teitelbaum believes the shoes which are called Plastic Soul could reduce waste from unwanted polymers and help clean up the footwear industry.

"I had the idea when touring the impressive Doc Johnson facility and seeing a few toys that didn't make it past quality assurance, get grounded down through a machine," Teitelbaum told Dezeen.

"The little rough cubes from the broken toys sparked a memory of EVA pellets and from there the idea was born," he continued.

"We wanted to remove the taboo and start the conversation around sexual wellness and health, while also making an incredible shoe that removed excess thermoplastic elastomer (TPE) that would have been thrown away or destroyed."

Only 16 per cent of plastic waste is recycled to make new plastics, while 40 per cent is sent to landfill, 25 per cent to incineration and 19 per cent is dumped.

Two years in the making, Plastic Soul is the first shoe from the brand. Plastic from sex toys that were damaged during the manufacturing process was ground down into millimetre-sized cubes of TPE, a polymer blend with an elasticity similar to rubber that is both durable and springy.

TPE is also sometimes referred to as thermoplastic rubber.

"Such a small amount of damages occur in Doc Johnson's supply chain, but when they do, we have a grinding machine that pulverizes the defective toys and collects the broken cubes in bins," Teitelbaum explained.

Once it has been ground down into cubes, the material is mixed with EVA foam, a highly buoyant, flexible and rubber-like plastic. EVA is often used to form the cushioning midsole of trainers or Crocs as its spongy qualities help to absorb impact shock.

This mixture is then injection moulded into the entire Plastic Soul shape and coloured in a creamy white.

Although Teitelbaum believes Plastic Souls could be a solution to plastic waste, the EVA foam used in its base is made from petroleum and would survive in landfills for up to 1,000 years. This means Rose In Good Faith's shoes don't directly reduce the amount of plastic that ends up in waste.

The shoes, which cost $130 (£111) have a raised arch in the footbed that has been engineered to support the wearer's foot by moulding to their foot shape over a few hours of wear.

In comparison to flat shoes, shoes with a raised arch support the wearer's foot by lessening any abnormal stress on the knees and hips when compared to flat shoes, according to the brand. 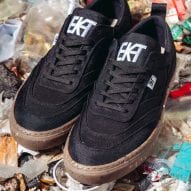 Effekt Footwear launches trainer made from 90 per cent recycled materials

While comparisons between Crocs and Kanye West's popular Yeezy sandals are inevitable, Teitelbaum cited the architecture of The Broad art museum by architecture studio Diller Scofidio + Renfro as his main reference point for the design.

"The initial design came from the angular, sharp architecture of The Broad in Downtown Los Angeles," he said. "From there, we added details of a chunky climbing boot seen around the sole and generous toe box and the low ankle details of a runner."

"Growing up I loved 0-lift sprinting shoes, which hugged the feet with a tall ankle tab for ease and looked fast with a very low profile," Teitelbaum added.

"We added those runner details and blended in the angular dimensionality of The Broad to finish off the design."

Scientists have warned that, unless drastic global changes are introduced soon, the amount of plastic waste infiltrating the natural landscape will exceed 12 billion tons by 2050 with vast quantities of it ending up in landfill or in the oceans.

In response, a swathe of designers have attempted to minimise the environmental impact of the footwear industry on the environment and reduce the amount of plastic that ends up in landfill each year.

German designer Emilie Burfeind developed a sneaker that has a mycelium sole and a knitted upper made from canine hair while Canadian brand Native Shoes designed a trainer that is entirely made from a piece of algae-enriched EVA.

The photography is by Ian Buosi.