Instead of chopping down a tall tree in the middle of a Los Angeles site, American studio Anonymous Architects incorporated it into this cantilevered cedar-clad residence.

Called House in Trees, the residence is located in the hilly neighbourhood of Echo Park. Dotted with mature trees, the site has a remote feeling, despite being surrounded by dense, urban development.

"It is an unusual paradox to have such a natural setting that occurs in the middle of Los Angeles – a city known for its endless sprawl and crawling traffic," said Anonymous Architects, a local firm led by Simon Storey.

A goal of the project was to preserve the site's natural features, "even if it meant having a tree grow through the house". To that end, the architects built one of the bedrooms around an existing cypress tree.

The dwelling is cantilevered over a steep hillside, a solution that minimised the foundation work and disturbance to the land.

By elevating the home off the ground, the architects were also able to provide a larger area for plantings.

The foundation consists of concrete piles, with steel used to support the cantilever. The house is framed with timber and topped with a standing-steam metal roof.

To maintain privacy, the architects placed the home near the centre of the lot, away from neighbouring homes and a public street.

A slightly curved driveway leads down to the garage and the main entrance, which consists of a large, folding glass wall that borders the kitchen.

Rectangular in plan, the house encompasses 2,000 square feet (185 square metres). The interior was conceived as two distinct units located under a single roof.

The main unit contains two bedrooms to accommodate a family of four. 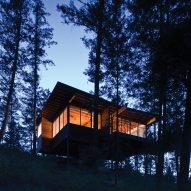 The other portion encompasses a kitchen, living area, office, bedroom and bathroom. The living room is lined with large windows and is wrapped with a wooden deck.

"This secondary area is used daily as an office and entertainment area, but can easily be closed off from the main space and used by visiting friends or family," the firm said.

Others residential projects in Echo Park include the "stealth density" Blackbirds development by Bestor Architecture, which consists of small-lot houses.

Photography is by Steve King and Michael Wells.